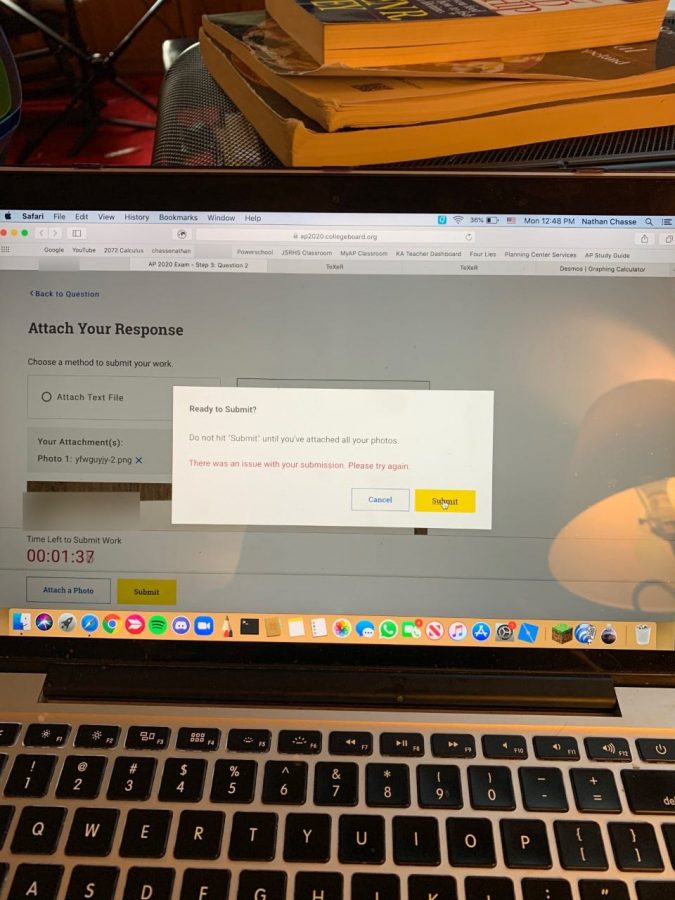 Many AP students, including some Venice students, got this message after attempting to submit their important AP exams.

This year’s online AP testing experience was marked by confusion, anxiety, and relief for many students. Amidst school closures as a result of the coronavirus, the AP testing coordinators — the College Board — made the executive decision to conduct this May’s AP tests online.

The original exams were of a 3-hour, 15-minute format, which, for most tests, consisted of more than three parts — a multiple choice section and one to three writing samples. The new exams were limited to one free response section and formatted to only take students 45 minutes.

Reactions from students following the reformatting announcement were swift and harsh; one Twitter user responded to the College Board’s social media rendering of the announcement saying that the new online exams will be “A dream come true for your suburban kids who will enjoy having their exam-taker-for-hire take the tests for them,” seemingly hinting at the 2019 college admissions scandal involving celebrities Lori Laughlin and Felicity Hughman, among others.

Tasemobi Anozie, a junior at Venice taking five AP classes and exams, had an overall positive experience with testing this May.

“Luckily, I was able to submit all of my tests on time,” Anozie said. One of the biggest problems involving this year’s AP testing was the issue of submitting on time or at all, mostly having to do with the variety of submission options, all varying in success.

Unlike previous testing years, students were not allowed to hand in or send paper copies of their testing responses. Instead, they had three options to submit online: taking a picture of their hand-written work, copying and pasting their work from an outside writing application (such as Google Docs or Microsoft Word), or attaching a PDF of their written document.

Each submission technique came with its own problems, and stories of students being unable to submit on time or at all blew up on the internet, especially on most students’ favorite social media app, TikTok.

Initially, the only option available for students unable to submit exams were makeup exams set to be held in early June. These exams, which would follow the same format and time frame as the exams held in May, sparked controversy among students who felt that simply taking a makeup exam after hours of studying and hard work was not enough and that the College Board should provide them with more support.

After the first week, which saw the College Board receive harsh feedback from students, parents, and teachers, students who were not able to submit for reasons other than time were able to email their responses in.

Yareli Lorenzo, a junior at Venice, planned to take her AP Spanish Language and Culture exam on its original test date of Friday, May 22, as one of the last exams administered this year. Instead, Lorenzo wasn’t even able to access her exam; she was locked out after numerous attempts to log in. Instead of being able to finish AP season when she had hoped, she had to take a makeup exam on June 4. Her experience went much better than before.

“The system didn’t want me to take the test again,” Lorenzo said. “I’m it was that phone that gave me problems after all; finally, I switched to my mom’s phone, and I was able to take it. The test itself was fine.”

This AP exam season has proved to be a difficult one, further highlighting some key issues people have with the already controversial College Board. As reported by the LA Times,  their College Board considered of and subsequently suspended the possibility of at-home SAT exams should the pandemic keep schools closed, Venice students and students around the globe may be in for more trouble with their college admissions testing.