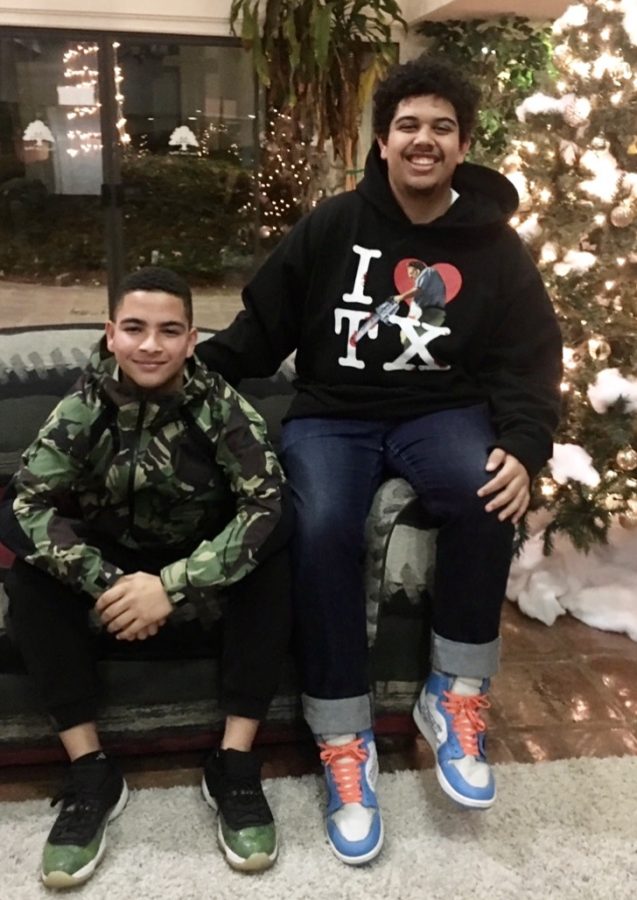 Mateo Holguin and his brother.

“As long as I can remember as a little kid, I’ve always been discriminated against. It has been weird for me because I am black, but have lighter skin because I am mixed with white and Mexican, just like my brother, but he is darker than me. He lived in San Francisco (Daly City) where most of the people in that area are white people and he has been pulled over more than nine times in the last two years just for no reason.

“It got to the point that one night he was driving home and they pulled him over, flashing their lights on the back of his car and made him put his hands on the steering wheel. Over four cop cars came by and they were all pointing guns at him. It is weird because he is only four years older than me. He graduated from college a couple of weeks ago. He was just a college kid driving home. He was really scared that night, and at the very end of it, they just said ‘It’s okay, you can go.’

After that, he heard one of the cops saying that it was his first time pulling someone over and the other cop told him ‘good job.’ I know that type of intensity doesn’t happen all the time, but it definitely does. Seeing that happening in my family, it’s really bad.”

“I live in a neighborhood where the majority of people are white, Mar Vista and Westchester, and I really do love my neighborhood. One day me (this mixed kid) and my neighbor and friend who is Iranian were walking home and there was this cop car that started following us and then it just stopped next to us. We were still talking, but we could feel they were staring at us. We stared back at them, not in a threatening way and they just left. It was just very odd.”

“When I hang out with my white friends around my neighborhood, I am always the first one who gets looked at. Or when I talk to adults at first, there is a reason why I am very polite, because even though I have lighter skin, when they see my hair or my clothes, they assume stuff. I have to come across to adults like that because if I don’t, they already have a prejudgment against me.”

“As kids, we are taught that if a police officer comes up to you, you just have to not say anything and don’t do anything, even if they do, and you just have to take it. This past week has shown us that we don’t have to take it anymore.  We have a voice, we are able to change something and that to me is just amazing. I hope people continue to speak up and put their voices out there because I feel like we are not done. We need to use this momentum to keep on going.”