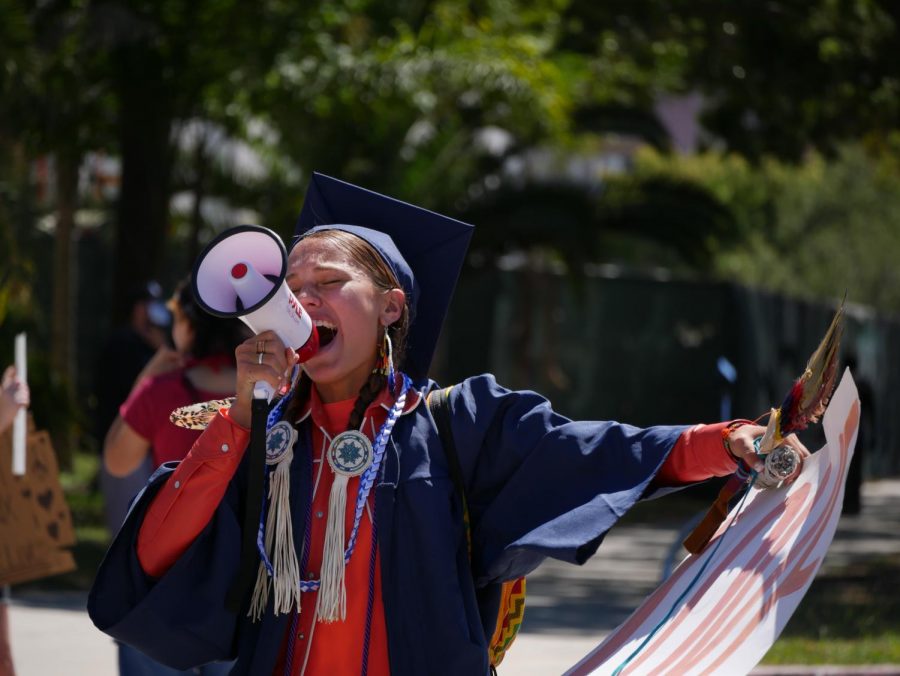 This chant, among others, was a highlight of the two-hour peaceful protest held at Venice High School on Tuesday, June 9.

Advertised on Instagram by organizers and graduating Venice seniors Cailee Grayhorse-Pupecki and Mya Edwards, this year’s graduating class wanted to tip their caps (as in, their graduation caps) off to George Floyd, the unarmed black man that was killed by police in Minneapolis only two weeks ago.

“Organizing this was out of necessity,” Grayhorse-Pupecki said. “I really hope that some change, some real change, comes out of this. [The situation] is not fair.”

At the protest, both organizers gave impassioned speeches that wowed the crowd of 50 or so students, parents, community organizers, and teachers.

In part of her speech, Grayhorse-Pupecki addressed how the COVID-19 pandemic has affected Venice students’ activism, saying that, “[Venice students] may not have been able to walk the stage this year, but we have an oasis of time [to fight for justice]. We stand here for those who did not get to graduate.”

Grayhorse-Pupecki also stressed the importance of equality in all sectors that have historically oppressed black and brown people, especially in education. She additionally cited her distaste with the overwhelming funding and presence of school policing.

Grayhorse-Pupecki, who herself is a mix of Native American, Black, Irish, German, and Italian, also highlighted how Venice High School is a model for the diversity and acceptance that should be observed around the nation.

“We are an amazing melting pot,” Grayhorse-Pupecki said. “We stand for unity, friendship, and loyalty. We are so lucky to be at a school that’s so mixed up. One love, one heart, we’re all in this together; let’s push forward right here.”

Edwards, the protest’s other organizer, gave an equally moving speech about the importance of changing policing as we know it today. She called for the defunding of police, especially LAUSD school police, who, according to her, are the most funded school police department in the country.

In place of the $80 million the school police department receives in funding every year from LAUSD, Edwards hopes that this money is instead allocated to in-person support services such as college and mental health counselors and nurses, among others.

Edwards leads the Venice High School chapter of Students Deserve LA, an organization which strives to enact real change within schools for students, by students. Edwards and other members of Students Deserve LA have created a survey for LAUSD students to express their opinions on the defunding of the police.

In the Venice community, there have been a variety of demonstrations tied to Floyd’s death, but the one at Venice High School was the first to be entirely student-led and organized in the area.

The peace observed at the protest was something that was positively responded to by the community, which was an aspect of the protest that Grayhorse-Pupecki and Edwards emphasized heavily. In their advertisement for the event, they described what they hoped to be “a peaceful, and I mean peaceful, protest.”

Music, popsicles, megaphones, and hugs were actions observed on Tuesday that were responded to by parades of honks from cars passing by.