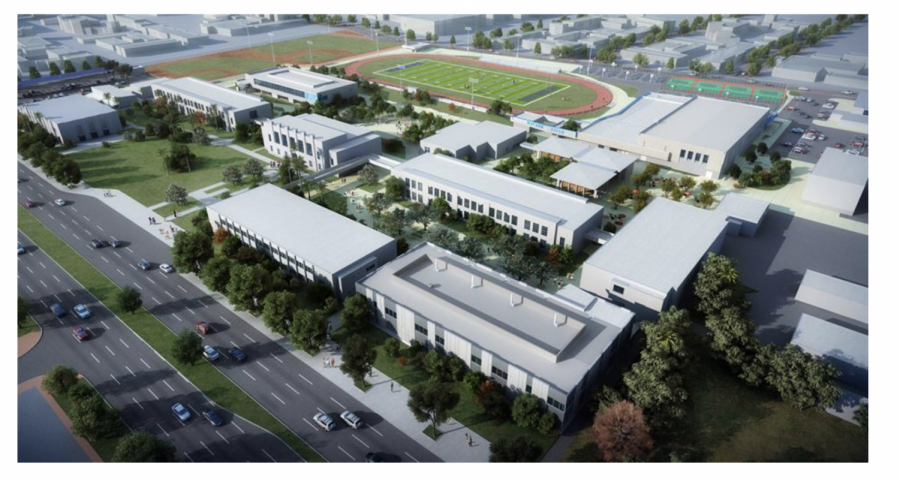 Venice High hosted its first virtual town of the school year hall last Wednesday to inform the community and students about hot topics on campus.

“I did want to do more community outreach this semester, especially with our distance learning,” principal Gabriel Gregio said. “We have some big areas that we have to talk to the community about and get some input.”

Principal Gabriel Greigo talked about the possibility of more campus security, as well as the addition of gates in the front of campus, to ensure the safety of students and staff.

“We need an advisory committee to come up with potentially cosmetically attractive gates to help us secure a campus,” Griego said.

“I understand the tradition of having an open campus, and I support it,” Griego said. “But I have to look at the whole picture. We’re a new school now and I want to make sure we preserve it.”

There are also much larger safety concerns regarding the need to preserve school grounds without Los Angeles School Police, Griego said.

According to Griego, every Monday custodians are faced with homeless individuals loitering on campus; the front of the new science building has turned into a hub for skateboarding and “hangouts” leaving more clean up for custodians; and frequently, they have to paint over graffiti.  People have broken into buildings too, including the West Gym most recently.

“We don’t have a lot of support in terms of school police to help us secure a campus.” Griego said. “We would usually have our substation on our campus but now we don’t have that support.”

Parent Patricia Ramirez expressed concern for the safety of students on campus and how having gates would make students safer.

“I would feel safe for my daughter to be on campus with those gates, knowing that nobody could just walk in whatever activity that they’re doing,” she said.

Venice High making progress in retrofitting auditorium
The opening of Venice’s auditorium may finally be on the horizon, too. The building has been closed for the past five years, leaving Venice deprived of an on-campus performing arts space.

The Visual and Performing Arts Departments, including the Theater and Music Departments, have been using alternate locations, including Mark Twain Middle School’s auditorium, throughout the span of the renovation.

“As a music teacher on campus, it’s really disheartening that it’s taking so long for the auditorium to be retrofitted,” he said.

But it may not be too long before these departments regain this performance space.

“It’s being submitted for Division of the State Architect approval, that usually takes about six months to review,” Griego said. “So we’re looking at maybe one more year for the auditorium.”

However, a reopening assumes that the ceiling is deemed safe, and does not require removal and reconstruction according to Griego

“They might have to remove the ceiling, if that’s an issue,” said Griego. “If it is, then it might take longer. But once it’s all said and done, we’re going to have our auditorium back.”

The modernization project will also refresh the school’s scenery and function. A new senior court is located behind the East Building, as well as other cosmetic updates. Many of the buildings, including the East, West, and Administration buildings as well as the auditorium, have been painted grey and fitted with grey trim, replacing the old royal blue paint.

LAUSD Facilities Team to Order Demolition of Learning Garden Greenhouse
The LAUSD Facilities Team, in charge of building and maintaining all LAUSD facilities, recently discovered that the greenhouse, toolshed and shade house onsite of Venice’s garden were “unsafe” and would need to be demolished.

The Learning Garden non-profit has had a 18-year partnership with Venice High allowing them to grow and maintain plants on site of the garden. According to LAUSD Garden Bulletin, this partnership will only continue for the next six months because the district will be opening a community bid for the garden space.

Although there was no mention of when the district would begin demolition, Griego did say there is no information of a budget set to replace the buildings.

The district in the coming months will be supplying storage sheds for The Learning Garden’s materials.

Griego highlighted a positive step forward for the garden.  The garden for the most part will be returned to its original size.

Around two years ago, at the beginning of the Science building construction, one acre of the garden was taken away and stripped in order to replace an outdated sewer line, leaving just a half-acre of the garden to work and plant.

Now, with the science building completely finished and the sewer line replaced, the acre of land will be returned to The Learning Garden for its original purpose.

With the full acre and a half of land and a new horticulture classroom in the science building, Griego wants to make sure it is being used to most benefit the students.

Gregio called on the Venice community to find students interested in horticulture as well as staff to be a part of the Garden Advisory Committee that would support the process of creating a successful horticulture program.

In addition, Greigo hopes that the Garden Advisory team will begin working on a campaign to recruit students virtually or in-person—depending on when LAUSD schools will reopen.

Newly completed building on Campus & Venice’s new Automotive Program
Modernization efforts taking place on the Venice’s campus will bring a variety of new classes to Venice. Among these will be auto classes, which will be held in the new shop building. This building is equipped with multiple garages and auto equipment.

To draw attention to these new facilities and programs, the school will run campaigns to spark and survey student interest before hiring teachers.

“The school is going to purchase the teachers, but now we have a campaign to fill those classes because you have to get kids that want to do this,” Griego said.

The prospect of a new auto program excited many community members. However, there was concern amongst parents that their children would be unable to participate in the new programs because of the rigid schedules imposed by the various magnet programs.

“I think it’s great that we’re looking into potentially having classes like in horticulture and auto shop,” parent Jamie Messinger said.  “But I can’t figure out where my kids are going to have room for an elective in their schedule.”

According to Griego, the counselors are working on assigning schedules differently, so that hopefully every student will be able to enroll in an elective class.

In addition, the new science building, located west of Cunningham Hall, is equipped with new engineering and science classrooms, which will allow the STEMM Magnet program to expand significantly. The attendance office will also be located in the science building.

Hole in Swimming Pool Roof has been fixed
After nearly a year of mechanical and structural issues, the Venice Indoor Pool is once again usable. The pool, which is owned by the City of Los Angeles on Venice’s campus, had a leaky and otherwise damaged roof that needed repair.

The pool’s roof has been replaced and the heater is fully functional again, which means that the water polo and swim teams can return to the water as soon as COVID-19 restrictions are lifted, Griego said.

New sport facilities projected to be done in early 2021 and 2022
While sport seasons are postponed until early 2021 due to COVID-19, students could experience some of the new outdoor sporting facilities later in the school year.

The Watson Field has been renovated with an artificial rubber track and a real grass field, Griego said.

“Our district made a good move to say no to artificial grass,”  Griego said. “Because in 10 years, the artificial fields are done—you have to replace it and that’s more money the district would need to spend.”

In addition to the new track and grass field there are now two official snack bars on both sides of the field.

The new baseball field is projected to be done as early as February of 2021. The new gym, tennis courts, outdoor basketball courts and softball field are all scheduled to be completed by February of 2022.