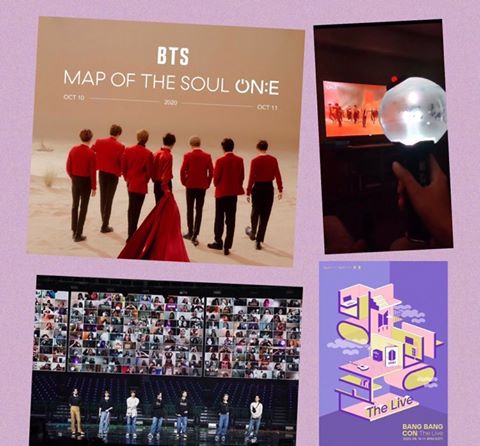 Because of coronavirus, many musical acts have canceled their shows. Junior Lily Oudommahavanh was supposed to attend BTS’s “MAP OF THE SOUL” tour and Taylor Swift’s “Lover Fest West” in person—but 2020 had different ideas.

“There’s nothing like physically attending a concert, going to the venue, and being around people who love the artists just as much as you do,” she said. “Still, I understood that because of the pandemic, we wouldn’t be able to do that for a while”

However, a lot of artists, including BTS, have hosted online concert-going experiences. According to Venice students, there are pros and cons.

BTS’s first online concert was called “Bang Bang Con: The Live,” which included a 14 song set-list, prerecorded breaks, and talk show-like segments. This online concert was the biggest audience for a paid virtual concert, according to ABC.  Even though it was seen as a big hit, it clearly wasn’t the same as an in-person concert.

Junior Dexiree Bracamontes, another BTS fan who attended three of their online shows, added that she feels like she “missed out on a lot.” The shining lights, the blasting music and the lovely fans/artists during these big events is what fans like her love to experience and greatly miss when they are forced to experience online concerts alone and through a screen.

“It’s such a different environment when being in the same place with thousands of fans and your favorite artists,” she said. “When they canceled the concerts, I was really devastated, but not surprised. It was the only thing I looked forward to this year.”

“Artists could have taken a break but they didn’t and I think doing online concerts shows their true dedication to their fans,” she said.

Although it’s great that artists are setting aside time to provide an online experience, it can also upset a fan knowing that their opportunity to see them live was taken away from them.

“I thought that it was a great idea for artists, but I also thought that the experience would not be beneficial for fans since we see artists online all the time,” she said.

Even if students can only experience concerts through a screen, it’s comforting to know that there are people out there, specifically their idols, who are trying to make the best of the situation.

“Overall, I’d say that I felt less alone during the concert since me and my family watched it together. It helped all of us come together to share our love for music and support our Latin artists.”