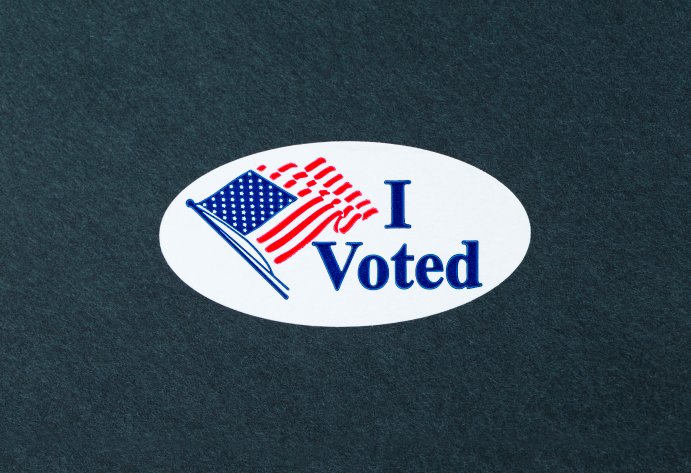 'I Voted' sticker on the black background.

The 2020 General Election will determine not only who leads our nation for the next four years, but how aspects of our local and state governments run. Many propositions and measures on this year’s ballot are extremely consequential, especially for students.

Here’s a quick rundown of those propositions most important to students in Los Angeles, along with some opinions from community members, including Venice High School students, on how this legislation will impact their lives.
Measure RR
Passed with an overwhelming 71% of the vote from Los Angeles residents, Measure RR approves a $7B bond for Los Angeles Unified Schools.

The measure also promises to allocate that amount of money to the district’s facilities to “update classrooms, labs, and technology [in schools] for the 21st century,” among other things.

Proposition 15
Prop 15, also known as “Schools and Communities First,” is a proposition that will levy taxes on properties worth over $3M in order to allocate more funds to local governments and schools. Though final results are still trickling in, the Associated Press has reported throughout election week that Proposition 15 did not pass, with over half of the counted votes in California voting “no.”

Supported fiercely by organizations such as the American Civil Liberties Union of California and members of the state and federal Democratic establishment like California governor Gavin Newsom, the law promised to close corporate loopholes that “benefit wealthy corporations,” as detailed by the official argument in favor of the proposition.

“Using the youth as a resource has been of tremendous benefit to this campaign,” she said. “Though many students in YLS are not of voting age, we know they will benefit from it—if not them, their siblings and family members will.”

Rivera originally began work on the Yes on 15 campaign when it was first proposed by  California petitioners years ago. Pitched by a “core group of racial and social justice organizations and labor unions” to close corporate tax loopholes, Rivera’s work in relation to the proposition’s educational promises was strong.

“YLS members strengthen so many skills through their advocacy,” she said. “From phone banking, making videos and other content, to writing blogs—all of it helps. The youth are so savvy with technology, and it’s so much easier to get messages out there now than it was five, ten years ago.”

However, opponents of the proposition believe that California’s high taxes are only going to steepen with this new law. Dissenters such as California’s NAACP (National Association for the Advancement of Colored People) and the California Republican Party spent over $53M to discourage California voters from approving Prop 15. It seems to have worked.
Proposition 16
Though California is revered for its progression and diversity, Prop 16 was struck down by California voters. The Associated Press projects that almost 60% of Californians opposed reinstating affirmative action.

Proposition 16 sought to reinstate the practice of affirmative action, which was outlawed in California in 1996 with the passage of Proposition 206. In its definition, Proposition 16 would reinstate the ability of “local and state entities to consider race, sex, color, ethnicity, and national origin in public education [and] public employment.”

Most controversially, the passage of Prop 16 would mean that colleges, universities, and other institutions of higher education could evaluate and consider a candidate’s race in their admission decision.

In recent litigation, such as that of Students for Fair Admissions v. Harvard in 2015, opposition to affirmative action has led to conversations about whether or not it constitutes as discrimination.

Senior Amani Shahid, who is applying to over ten colleges this application season, said that reinstating affirmative action would “allow for there to be diversity and inclusion in each [academic] field.”

Upon the shooting deaths of George Floyd and Breonna Taylor earlier this year, many examples of anti-racist legislation have been discussed in an attempt to undo the injustice minorities experience in this country.

Shahid said that Prop 16 would have been a “great opportunity for people of color who probably wouldn’t have been considered in college admissions more.”

“It could lead to further advancements in fixing social injustice as well,” she said.

Upset about the proposition’s failure, Shahid feels that it is the decision of California voters in this matter that stalls social reform.

“I would say that we aren’t going backwards or forwards by not passing Prop 16,” she said. “We’re stagnant. America and California are taking it too slow for a push in social equality.”
Proposition 18
Proposition 18 will allow 17-year-olds to vote in primary and special elections that precede the general election, as long as they will be 18 before said general election. As projected by an Oct. 16 poll by Probolsky Research, California voters decided largely in opposition to Prop 18, with the Associated Press reporting that over 55% of California voters opposed the proposition.

Such a law has been enacted in a number of other states, including in the nation’s capital. A fairly modern idea, most of these amendments to voting age in other states were enacted in the past two decades, with the most recent one passing in Colorado last year.

Though many Venice High students would benefit from the passage of Prop 18, Venice senior Tiya Mengesha is firm in her opposition against the law even though she would be able to vote in local elections should it pass.

“I believe that Prop 18 has good sentiment and thought behind it, but I don’t believe it should be implemented,” she said. “Even with how active many young people are in progressive movements, we’re still very young and may not be mature enough to not abuse the right to vote.

“Especially in my age group, many kids would go out and write in Kanye West for president just because he’s famous, thereby belittling the meaning of their vote. Don’t get me wrong, if I was able to vote in this election, I would. Despite that, I think in very consequential elections, it would be best to leave the voting age at 18.”
Proposition 22:
Passed by a margin of nearly 2M votes, Proposition 22 and its corresponding campaigns in support and opposition has become the most expensive ballot measure in California history. Funded primarily by the rideshare companies for which the ballot favors, over $186M was spent.

Proposition 22 promised to keep app-based drivers and employees for companies such as Uber, Lyft, and DoorDash as independent contractors—free from the restrictions California law places on them as official “employees.” Among these restrictions include paid time off, minimum wage, and, most importantly, employee benefits like health insurance.

As an independent contractor for Postmates, one of the largest third-party delivery services, senior Keith Venable would be directly impacted by this legislation.

Proponents of Prop 22, with Venable among them, believe that remaining independent contractors for these companies gives drivers the independence that got them into the business initially. As a student, Venable needs this flexibility and independence to maintain and support his academic responsibilities.

Worker’s rights groups believe that rideshare companies are exploiting workers for profit and depriving them of rights and privileges that all employees deserve. Chief among their talking points is healthcare, which is a privilege many traditional employees in the state benefit from.

Venable understands this concern from the opposition but keeps faith in his source of income.

“Delivery companies such as Postmates are making moves to provide low-cost health insurance to drivers with the company Stride, so in that aspect they are helping us out,” he said.

This past August, rideshare companies Uber and Lyft temporarily suspended service in California after a court decision relating to classifying their drivers as employees rather than independent contractors. Many, including Venable, believe that these companies (and their food delivery constituents) would have “thrown a fit and pulled out operations in California” if Proposition 22 hadn’t passed, he said.

Had this been the result, Venable said he would experience a “plummet” in his financial situation and be “back to job applications,” which are more scarce than ever in the wake of the COVID-19 pandemic and the job loss it has caused.