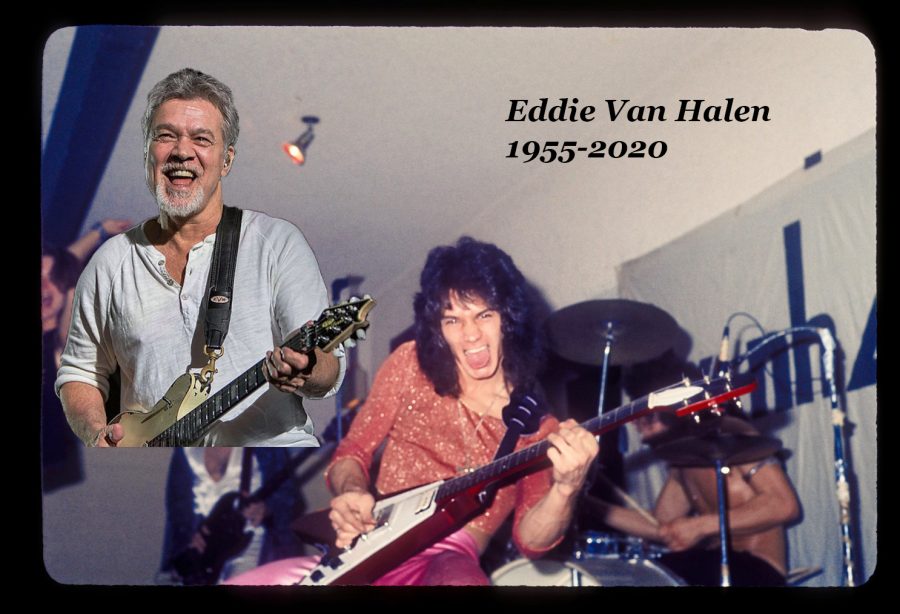 The global rock and roll community lost one of its most outstanding heroes.

95.5 KLOS, widely regarded as Southern California’s rock station, played exclusively Van Halen in his honor for several days following his death. Tributes to his memory from fellow bandmates, rockstars, and the public sprung up online, on TV, and on the radio in the following weeks.

It’s been over a month since Van Halen died, but anybody who loves rock music is still in a state of shock. The scope of his influence, depth of his creativity, and awe-inspiring skill leaves him immortalized not only in the Rock and Roll Hall of Fame, but in the hearts and minds of entire generations. Van Halen’s level of mastery of his instrument remains unmatched by any guitarist to date.

You know it’s him immediately: whether it be a precise technical lick, laden with pinch harmonics, as in the intro to Ain’t Talkin’ ‘Bout Love, or an insanely complex and calculated solo, as in Beat It, or one of his signature high octane riffs, like in Best Of Both Worlds. There is simply no comparison between the distinguished sound of Van Halen and the rest of the guitar world.

Van Halen played guitar like no one else, mainly because he introduced a distinct way of playing to mainstream rock – fast and ferocious finger tapping, which he demonstrated in this 2015 interview at the Smithsonian. He was a pioneer of hard rock and an exceptional guitar virtuoso.

His driving, heavy riffs are instantly recognizable, and his melodic, soaring solos elevated the electric guitar back to its former place as the primary melodic instrument in rock at a time when synths were dominating the pop scene. Van Halen helped change the trajectory of rock music forever, opening the door for countless other bands to proliferate within the hard rock genre. He inspired many up-and-coming guitarists, including Metallica’s James Hetfield and Dave Mustaine, Mike McCready of Pearl Jam, Pantera’s Dimebag Darrell, and Kerry King of Slayer.

Van Halen also jump-started the glamorous hair metal scene in L.A., and could frequently be found with groupies in such establishments such as The Rainbow, a bar and music venue on the Sunset Strip.

In fact, that is the very establishment where my mother had an epic encounter with the band’s lead singer and exuberant frontman, David Lee Roth, back in the ‘80s.

I am blessed to have been able to see Van Halen live in concert at the Hollywood Bowl on Oct.  2, 2015. I will never forget how energized I felt when Eddie was shredding onstage. Everyone in the audience was blown away, unable to avert their eyes from the sheer talent of the man in front of them. You could feel the depth of the distortion in your chest; the rapid, fiery licks erupted outward from the massive speakers and connected with you like lightning. It was a truly electrifying experience.

All of this makes his death so tragic. He was a relatively young man, and few knew of his illness. Nobody expected him to go so young, nor was anyone prepared to deal with the incredible loss of talent. Fans were surprised, some unable to comprehend what had happened, after hearing the news.

“For a second, it felt like it wasn’t real,” said junior Polina Asauluke, a guitar player. “Losing Van Halen was like losing a piece of myself. You realize that the person you look up to so much is not with you anymore.”

Asauluke fondly recalled her introduction to the music of Van Halen.

“I think I was around seven years old,” she said. “I was in my living room when a Van Halen music video started playing on the TV. I remember seeing Eddie play and thinking I’d never seen anything like that before. I thought that was the coolest someone could possibly be.”

Asauluke talks of her admiration for the late guitarist and also finds solace in their similar backstories.

“I look up to him a lot,” she said. “Especially because we have similar backgrounds. We were both born in Europe and our parents immigrated to the U.S. when we were children.

“Guitar playing-wise, I look up to him not only because of how technically skillful he was, but also how innovative and expressive he was.”

Senior Brando Perez, another guitarist and Van Halen fan, was also surprised and saddened by his death.

“I found out on the morning of Oct. 6 via an Instagram story,” he said. “I thought it may have been a hoax, so I searched it up, and unfortunately it was true. I was shocked because the guy looked healthy, and to see that suddenly he passed away was truly sad.”

Perez explained how having Van Halen as a role model helped him improve his own playing.

“I would say he’s up there in the list of the many guitarists that influenced me,” he said. “Many of Eddie’s guitar tricks, such as pinch harmonics and his famous technique, the finger tap, helped elevate my playing.

“He is what one would call the American Dream. He was not from the USA. He was from the Netherlands, but his passion and determination to make it in a country he wasn’t from is among what makes him someone to look up to.”

Perez also appreciated Van Halen for his advocacy and desire to share the joys of music with the world.

“I understand that there were many people who were impacted by his death, and it impacted me as well,” he said. “I was pretty sad about it because I never knew what he was going through. It wasn’t too long ago that I saw a video of him teaching others about how he began to use his finger tap method, and when he played on Jimmy Kimmel Live.”

Van Halen was a major donor and ardent supporter of music education for kids.

Van Halen’s own life affirms this belief. “Music kept me off the streets and out of trouble and gave me something that was mine that no one could take away from me.”

It is this music that lives on eternally in the realm of Rock. And like many others before and after him, it was the path to success and greatness.