From casting calls to home studios: How have creatives showcased their work during COVID-19? 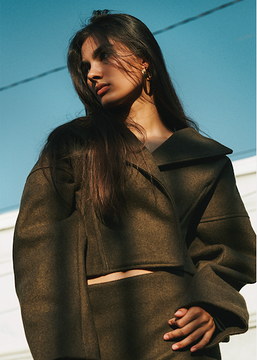 As Venice students make their way through months of quarantine, those whose only priorities are school and friends have managed to deal with the issues of deadlines and breakups pretty normally. But how have those who’ve had their dream of breaking through the barriers of music and art crushed by the pandemic done so far?

The impact of the virus has undoubtedly uprooted us all from life at Venice, as most students have retired to the comfort of our beds for the dual purpose of sleep and work. However, it hasn’t been that easy for everyone.

Junior Santha Nallengara was scouted nearly two years ago at the Third Street Promenade by a modeling agency and has been working ever since. She said that she hadn’t found much interest in the industry before she was scouted, but once she started getting casted and walking runways, she fell in love with the experience—“almost like acting, but in photos.” Nallengara’s admiration for the industry was clear, dreamily saying that the process is “so cool.”

She expressed that the pandemic has greatly inspired her to pursue modeling, at least through college where she plans to go into cardiovascular or neurosurgery.

“Quarantine really inspired me actually, and watching America’s Next Top Model also opened my eyes to a world I haven’t experienced yet,” she said. “It’s really interesting to me.”

“We work in a well-ventilated area always unless we’re outside, and in any case, we’re all wearing masks, except when I’m modeling,” she said.

Sadly, as businesses struggle to stay afloat, many models’ work has greatly decreased. Nallengara said that it’s rare she goes to shoots anymore as of recently, but when she does, the social distancing orders are taken very seriously. The socially distanced way is all she knows, and it’s one of the few times Nallengara actually gets to go out and socialize.

COVID-19 has impacted the work of other Venice creatives. Junior Anthony Ortiz, a rap artist, has been writing music since elementary school. He expressed that he didn’t take the pandemic seriously at all at first as many teens did. However, Ortiz expressed that as the George Floyd protests traveled from Minneapolis to Los Angeles, everything became a reality to him.

Ortiz said that “the pandemic ruined the whole year, but I knew I had to stay on top of the music.”

“I felt like giving up for a second because I was slacking off, but I got back on my stuff,” he said.

Ortiz further noted that the uprisings are what caused him to snap out of his fog and start caring about his and others’ safety.

As for inspiration, he’s felt that it’s gotten increasingly difficult to write and produce with more time alone in quarantine.

“It just wouldn’t hit as hard anymore,” he said. “I overthink it.”

He began writing poetry through an after-school program called LA Scores, whose mission is to help students lead more engaged and healthy lives. During this time, Ortiz had been inspired by the rap group NWA, and from there started writing his own music.

After writing a few crude first songs, he began broadening his taste in music. More recently, Ortiz is inspired by a Spanish singer-songwriter Rosalía, but his taste in music spans anywhere from Marvin Gaye to DaBoii.

Ortiz has a beautiful homemade studio, complete with a keyboard, drum pads, mics, and editing software and computer systems. When asked about the songs he had recorded, Ortiz said “all the songs I have right now are just me talking out of my hat.”

He claims that most of his recorded music is planned for an album “just for fun,” while a more serious album about his life struggle and reflecting off of his reality has yet to be recorded, will be out later next year.

Miraculously, people have learned to adapt and manage to produce content that they are proud of through this tumultuous year. The pandemic delayed many artists’ breakthroughs into the world of their choice, but their drive and passion has only pushed them to push farther past their creative limits.