From Mexico with Love: Venice Alum Walter Thompson-Hernandez back to Inspire Students in Zoom Q&A 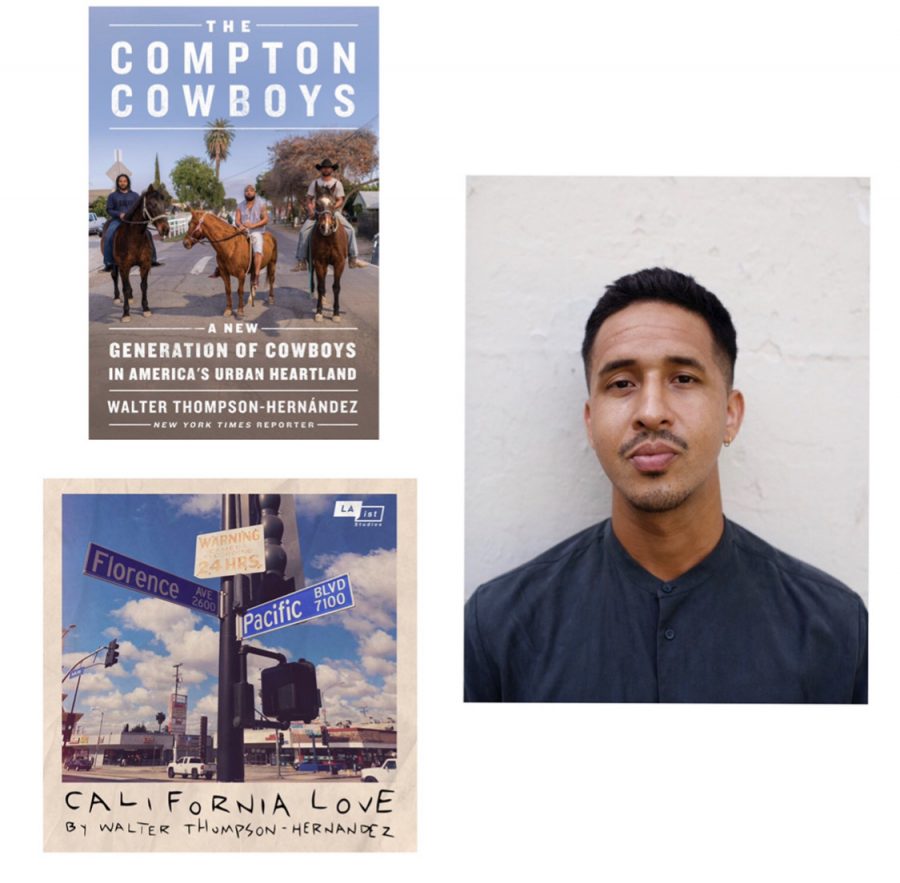 “Can y’all hear me? It can get really loud around here sometimes.”

Speaking over the sounds of barking dogs and trucks carrying chickens and cows, Walter Thompson-Hernandez ’04 made sure he could get through to a group of Venice High students from his mother’s home in Magdalena, Mexico, joining them via Zoom.

The former Venice High basketball player and AP scholar now was back to inspire the students that sat in the same rooms he did.

The goofy and friendly spirit at the center of the Zoom Q&A session hasn’t changed much since high school, he was the type of student that was friends with everyone in all cliques.

Creator of NPR podcast California Love and author of The Compton Cowboys: The New Generation of Cowboys in America’s Urban Heartland, Thompson-Hernandez visited Venice High after English teachers Eli Davidow and Lorena Santos began using his podcast as part of their classes’ curriculum.

The podcast details elements of Thompson-Hernandez’s life growing up in Los Angeles, from his adventures tagging walls as a teen to his mother’s experience immigrating to America from Mexico.

Thompson-Hernadez’s former athletic director Kirsten Farrell was very excited to see him again, especially under the current circumstances of distance learning and social distancing that prohibit an in-person visit.

“In these crazy times, we need genuine connection again,” Farrell said. “To know that he connected with our students in the way he did felt really good.

“It would have been so beneficial for more students to have witnessed this event. To have someone like him, a person of Mexican and Black descent, who so reflects the Venice High student body would have meant the world to many of our students.”

Lastly, Thompson-Hernandez told students to “move fearlessly through life,” which is a testament Farrell sees as her biggest takeaway from the virtual event.

As a writer and storyteller, Thompson-Hernandez’s advice proved useful for those looking to pursue a similar career path from Venice High.

One of the moderators of the Q&A, freshman Mia Lazo, was looking for an answer on how to overcome writer’s block. She was inspired by Thompson-Hernandez’s advice of embodying the essence of an old jazz pianist who allows themselves to be one with the piano, similar to a writer typing on a laptop.

Lazo also explained how having someone like Thompson-Hernandez, a successful journalist who grew up in the area and graduated from Venice High, is important for other Venice students to know about.

“People always say you can do anything.” she said. “But to have someone who really did something, who really followed their dreams and managed to do it and are also so similar to you, is incredible.”

She enjoyed learning pieces of California Love in English class and felt that the stories represented her and her peers, which is something that rarely happens in the classroom. A lot of Thompson-Hernandez’s podcast episodes mirrored Lazo’s family’s own experiences.

“To see minorities and people who have very similar racial identities as me is really cool,” she said. “He has such a similar experience both as an individual and his family is so similar to mine. It was amazing because it was never represented before for me in my education.”

Lazo’s father and uncles immigrated to the US from the Philippines in the 1980s and landed in West LA. Her mother and father experienced living in Venice and Inglewood when it was dirt cheap and dangerous to live in.

Lazo grew up hearing stories about the discrimination her family experienced because of their immigrant status. Although Lazo’s family is not Hispanic, she still feels extremely touched by Thompson-Hernandez’s family stories not only because they are both minorities, but because it showcased the experience of being an immigrant around Venice and in Los Angeles.

“All my life I’ve heard these things and experiences, but to have someone talk about it and understand what it’s like to grow up and watch it all happen around you– is really amazing.”

One of the final questions a student asked Thompson-Hernandez was “What’s your philosophy in life?”

In response, the Venice High alum said, “Be kind and keep your energy pure.”