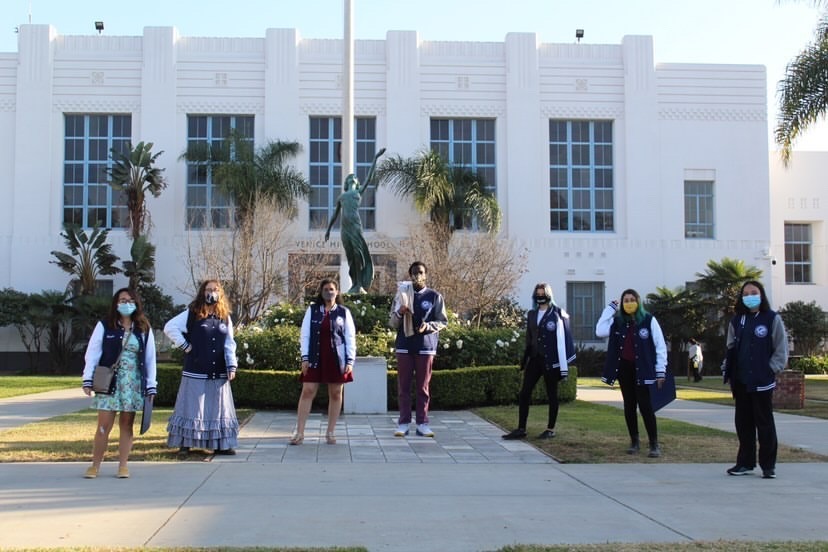 These seven seniors are a portion of students who were awarded a Jacket of Excellence. (left to right) Kayla Feeney, Libby Oren, Fatma Ali, Tasiemobi Anozie, Genevieve Marino, Emma Hanna, and Deanna Chun.

“I’ve been looking forward to getting one for a few years, so it was just very satisfying and it’s great to get it at this kind of time.”

Reflecting on his new Jacket of Excellence, senior Guru Rajesh is one of the 86 seniors receiving this Venice tradition. Eighty-six seniors who met the below requirements were celebrated in a virtual ceremony on Dec. 11, led by college counselor Dr. Renysha Scott and Assistant Principal Lakisha Clark.

The annual award given to the highest-achieving seniors at the end of their 7th semester.

have attended Venice High for at least three years (including their senior year),
have no more than three unsatisfactory (‘U’) marks on their report cards throughout their years at Venice, have a grade point average of 3.75 or higher
and have no more than seven absences per school year.

Students must also show evidence of extracurricular and community involvement to be a competitive applicant for the award. Rajesh demonstrates this community involvement as the Treasurer for the Class of 2021 club and as the Vice President of ACE, the Architecture, Construction, and Engineering club.  Additionally, he is a member of Venice High’s Science Bowl team, which competes against other high schools in Los Angeles in STEM (science, technology, engineering, and math) subjects.

Qualifying for the award wasn’t too tough, but it was no walk in the park either.

“I’ve usually been pretty diligent about my academics and stuff throughout school,” Rajesh explained. “Starting in elementary school, I’ve been pretty consistent about academic stuff.

“The attendance requirement was a bit more challenging for me, especially since I had to be careful when I went on a family trip or something or had a sick day.”

Senior Rachel Halbert, another Jacket of Excellence recipient—who is on an equestrian team, does community service at her church, and is a Girl Scout—recommends the following advice for scoring this award: “Know what you want, then taking those steps to execute it.”