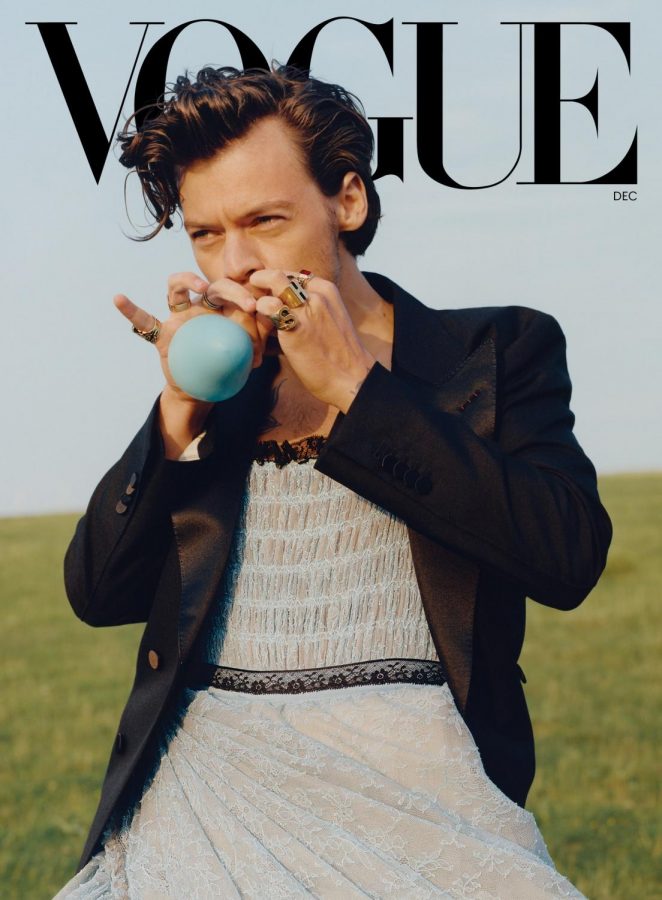 For the first time in its 128-year history, a male celebrity, Harry Styles, has appeared on the cover of Vogue Magazine. Controversial in its nature, Styles did more than be the first man to go solo on the cover —  he also wore a dress; a very elegant one.

This sparked both praise and controversy for Styles. On the one hand, many commended his confidence in wearing feminine clothing on the cover of a popular magazine, but as time has shown, the praise has been accompanied by criticism.

Conservative commentator  Candace Owens wrote on Twitter, “There is no society that can survive without strong men. The East knows this. In the West, the steady feminization of our men at the same time that Marxism is being taught to our children is not a coincidence. It is an outright attack. Bring back manly men.”

Many, including myself, were frankly confused at Owens’ comment. Men playing around with gender expression is nothing new. The look for male rock-and-roll artists has typically been androgynous and the person who was the template was Elvis Presley.

Presley was known for looking more like a “pretty boy” rather than a typical singer or celebrity of the 1950’s,  who had a beefier and more “manly” look. On top of that, his wife, Priscilla Presley has recently revealed that he wore eye makeup to make himself more expressive and his love for it.

David Bowie, Freddie Mercury, and Prince are also very notable examples of male singers expressing themselves in a more androgynous and gender-fluid way. Bowie had an androgynous alter ego named Ziggy Stardust, Mercury was in drag for the “I Want to Break Free” music video, and Prince always expressed himself in an androgynous way. All these examples are artists who were at the heights of their careers decades ago. They looked objectively amazing and showed that you don’t have to wear “normal” or “manly” clothes to be confident and look great.

Even now, celebrities like Jaden Smith, Tyler the Creator, Billy Porter, and more are known for playing around with fashion and/or gender expression, but they don’t get as much praise or attention as Styles has now. Styles is the just the first to be featured in an androgynous look on such a large platform, but we also can’t just forget all the LGBTQ+ and POC artists and celebrities who break down social norms constantly.

For years, LGBTQ+ and POC kids have had to look up to people who don’t look and feel like them. Androgynous fashion and exploration of identity is going to be a huge thing future generations, which means we need to highlight people of different backgrounds. It’s 2020, and we shouldn’t have kids still looking up to only cisgender, heterosexual, white celebrities like Styles. Everyone deserves to see someone who looks like them or someone they can relate to on covers of magazines as well.

It’s great to see more celebrities and big names breaking down social norms in clothing and style. It helps normalize shopping for different kinds of clothing without having to feel like you’re not in the right section or like you have to limit yourself.

As Styles said in his Vogue article, “When you take away [the stigma of] ‘There’s clothes for men and there’s clothes for women,’ once you remove any barriers, obviously you open up the arena in which you can play… It’s like anything — anytime you’re putting barriers up in your own life, you’re just limiting yourself.” We shouldn’t limit ourselves just because someone said dresses are for girls and pants are for boys with no reasoning to back it up.

Clothes are clothes at the end of the day. All of us, no matter how we identify, should be able to wear what we want. Whatever makes you comfortable should be your style. Don’t put barriers on yourself and express yourself how you want.