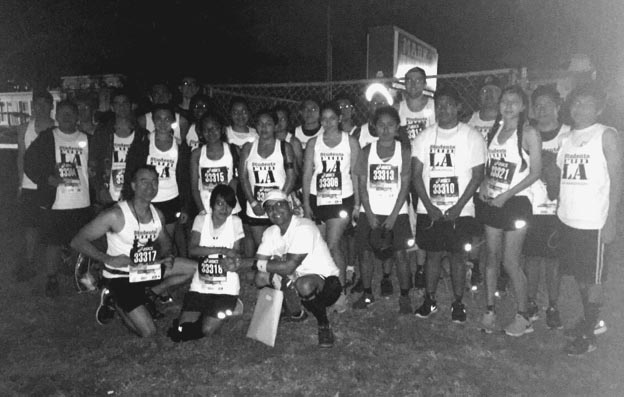 The Venice SRLA team the morning of the L.A. Marathon.

On Sunday March 15, I ran the 30th Annual Los Angeles Marathon with the Venice Students Run Los Angeles (SRLA) team along with thousands of other runners. The runners braced the record-breaking heat to run 26.2 miles from Dodger Stadium to the Santa Monica Pier. All marathons are 26.2 miles.

Most people are probably wondering why on Earth I have put my body through this torture for the past five years. Since my first marathon in 2011 in eighth grade, I have felt a sense of pride and fulfillment from it that nothing else has been able to give me.

That fateful Sunday, the team and I ran the race that we had been training for since August 2014.

At 4:35 in the morning, our bus to Dodger Stadium where the LA Marathon starts was filled with noise and excitement. We pulled into the stadium, got off the bus and mentally prepared ourselves to run all the way to Santa Monica.

This year, the race started 30 minutes earlier than usual, at 6:55 in the morning, because of the anticipated heat.

The horn to start the race blared and the song “I Love LA” started to play. This is when team members dispersed to reach their appropriate places in the pack and we said our goodbyes to each other. As I was getting closer to the start line, I felt my heart beat like a jackhammer.

I crossed the line. My legs took over and I officially started my fifth LA Marathon with SRLA. For the first three to four miles, the running traffic was hell and I could barely run at my own pace. In fact, I had to go slower than I wanted to. Once I passed these miles, however, I was able to run at my own pace. As I was running, I was able to see some historic landmarks like the Hollywood sign, TCL Chinese Theater and the Capital Records building. The temperatures hovered around the upper 80s.

Around mile 14, I started to feel the heat getting worse. Around this time the firefighters began to open up fire hydrants and spray runners with water. Every time they did, I ran through the water to stay cool.

Two miles later, I began to feel muscle cramps in my hamstrings, thighs, and lower back. As I was approaching mile 17, I had to walk for a few minutes. I stopped at a medical tent where I was able to get Icy Hot sprayed on my hamstrings and thighs. A few minutes later, I was able to start running again. From then on, I was alternating between running for almost a mile then walking a block.

As I approached mile 20, I had to stop again at the medical tent but this time to receive some fluids and get another spray of Icy Hot. This helped me out a lot and from then on, I was at a pace of running for about 10 minutes then walking for two.

Once I got past mile 22, I had to stop at the medical station again. This time they gave me Motrin to ease the pain of cramps and liquids so that I would not faint. Once again I started running, but I walked after eight minutes of running.

Passing mile 24, I saw a building towering in the sky and I knew that I was less than a mile from the finish line. I began to run with every ounce of my strength that I had left. As I was coming up on mile 26, I saw the finish line. I took a drink of water and I began to sprint. My whole body was screaming in pain, but I kept running closer and closer to the finish line.

As I crossed the finish line, I felt a huge sense of pride wash over me. As I was walking to receive my medal, my memories became a blur. I received a medal, took photos and walked to meet my parents. My parents and I had to walk almost a mile to Santa Monica High School to let my team know that I was leaving. Walking that mile was the hardest part of the whole day.

Once I checked in with my team, I got some food and headed home, feeling good about accomplishing something that I have been training for since August.

Despite the painful cramps, the exhaustion, the hunger, and all of the tough training, running the LA Marathon gives me a feeling that makes me feel complete. I’m not going to stop running. Not now, not ever.