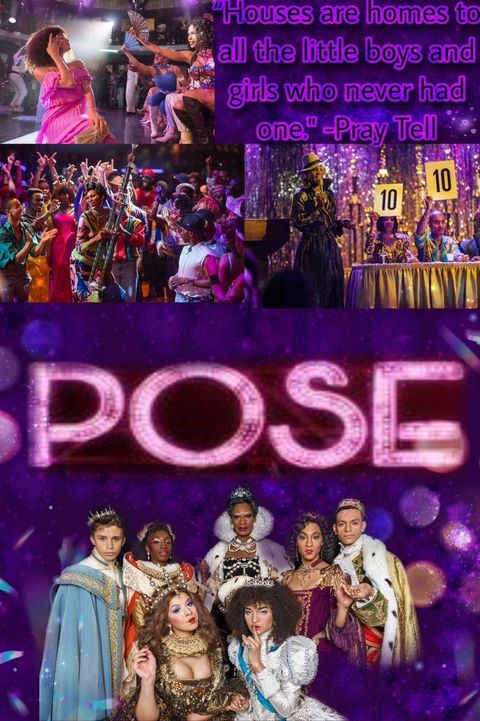 “Ten, Ten, Ten. Tens across the board!” This is exactly what every ball performer wants to hear. Balls are an important event for the African-American and Latino LGBTQ+ community where they come together to show off their costumes, poses and slay the categories. The ballroom scene has changed over time but the same excitement and love has continued.

Pose is an extraordinary show that attracted me because of its empowering characters. This show is filled with such rich culture as it follows the lives of New York City’s African-American and Latino LGBTQ+ and gender-nonconforming folks who participate in the ball culture of the 1980s and, in the second season, early 1990s.

In the first episode, we are introduced to the glorious House of Abundance. We follow our main characters into a museum that was displaying royal garments, in which the main characters go to take in the culture, quite literally. As soon as the museum closes, the House “borrows” the museum’s royal attire for the night’s ball as they will be participating in (or walking) the ball as the “The Royal House of Abundance.”

Their commitment shows exactly how extravagant the balls are, with some being willing to get arrested to win that trophy. However, folks did not put so much effort into the categories they participated in the balls for the sake of a trophy, but because the balls allowed them to live a fantasy. The trophies came with respect and prestige within the African-American and Latino LGBTQ+ community. Most importantly, they represent a feeling of acceptance and believing that they reached the ultimate goal of fitting into the White, heterosexual world. The way the characters were always eager to win that trophy had me rooting for their success.

This show not only exhibits the glamorous nightlife but also the injustice that goes on during the daylight. Damon is only 17-years-old and gets kicked out of his home by his biological parents for being gay. While sleeping in the park benches of New York City and dancing for some spare change, he is discovered by Blanca, one of the children from the House of Abundance. However, after being diagnosed with HIV, Blanca decides that now is the time to reach out for her dream.

Building your own house takes responsibility, commitment, and attentiveness. Houses are made up of a chosen mother and/or father, and, of course, legendary children. Mothers often get to choose their children for what skills sets they contribute to their Houses so that trophies can be won. Thus, Blanca wants to create a house in which she can provide a home for those who have been rejected by their biological family and seeks to encourage them to pursue education or a job that would allow them to live a better life. Blanca’s House of Evangelista is awed by everyone, and I was awestruck for being brave enough to challenge the one and only Elektra Abundance, mother of the most prestigious house of the balls, The House of Abundance.

Power and respect is given to those who are able to win the most trophies and the ones who have strong mothers leading them. One of my favorite events was the crowning of “Mother of the Year.” I love how there was a special event for the mothers who sacrifice everything for their children to live a comfortable life. They are the ones who encourage, protect, and provide comfort to their homes.

Moreover, Pose highlights the hardships endorsed by the African-American and Latino LGBTQ+ community, but pays especial attention to the discrimination that transgender women of the time encounter and continue to encounter today. I appreciate that this show does not only humor us with all the sass and reads, but educates us on the hardships that the community faced as they were consumed by the plague that HIV was, attacking many gay and transwomen. Many of the transwomen in the show slowly become infected with the virus due to the sex work they were forced to conduct because the “straight world” did not deemed them “real enough” to occupy any job that the privileged White, straight women had the opportunity to particpate in. Another character in the show who suffers from HIV was Pray Tell. Being a highly respected member of the community, Pray Tell takes with him on this sad journey as he battles with accepting his positive status all while seeing his lovers die from left and right because of the virus. It made me upset seeing a sensational person having to suffer from a virus while fighting his own denial and hiding it from others so he wouldn’t be judged. Furthermore, Pray Tell is based on a real person from the balls who was also the one who hosted the balls and plays a key role in keeping up the energy in these balls. The audience is taught about the importance of using protection when engaging in sexual activities, but also demonstrates the strength these characters have to stay strong and not let their positive status from enjoying life and participating in the balls.

The tyranny towards the transgender community was greatly revealed through discrimination, taunting, and murder. Discrimination was conveyed when Angel Evangelista was refused to continue modeling for being transgender. They were taunted by outsiders and even people in their community for not “passing” as a woman. Harmful actions like murder was seen when Candy Ferocity went missing only to be found dead in a hotel room, leading to the thought of her being murdered for being transgender.

One scene that attracted me to this show and has become increasingly popular is from the second season of Pose when a White woman claims that she is no dummy and knows they are pretending to be women. Elektra with full confidence “reads” her and says “I know our presence threatens you, we fought for our place at this table and that makes us stronger than you’ll ever be.”

Overall this show is definitely an eye-opener for many as it lets us have a peek of what the African-American and Latino LGBTQ+ community continue to face every day. It showcases how strong African-American transgender women are and how no matter what they keep their head held high. Balls are a safe haven that are a place to have fun, be accepted and just escape the cruel parts of reality.

I appreciated the representation this show gave especially by using actual transgender people instead of hiring straight people to tell their stories, as has been done by other shows and films. This show is a must watch, because it is very educational—but it’s also something you can laugh, cry, and feel empowered by. Pose is a show that would definitely teach you how to live, work and pose.