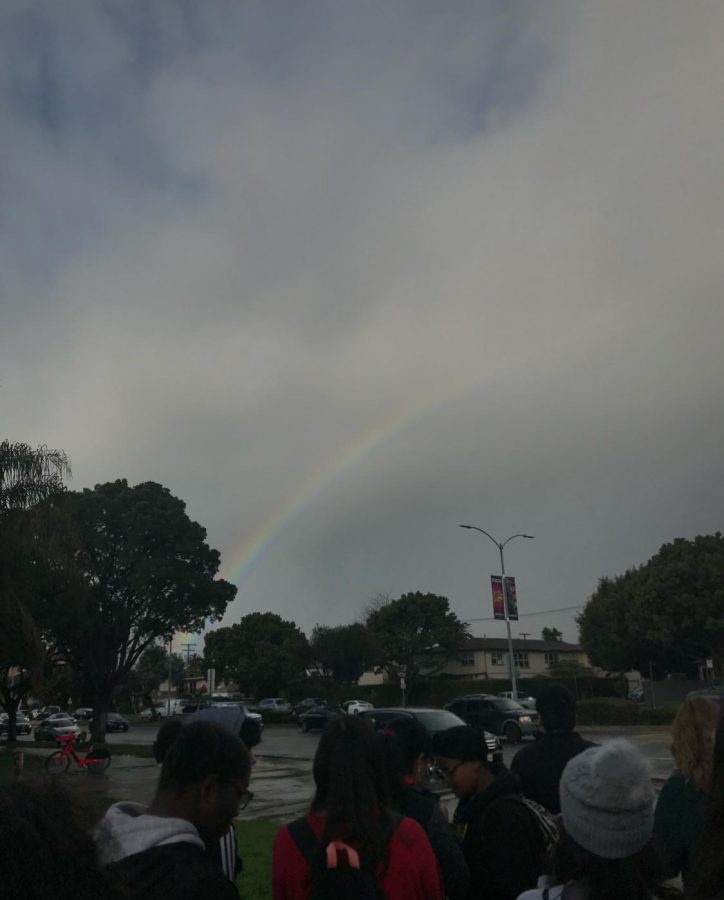 I walked into the West building and smelled what could only be described as a dying animal that had been left unattended reeking from Ms. Campolet’s Honors Chemistry class. Just another day at Venice High.

By 8:45 a.m, messages started flooding my phone. I decided to check why I was getting so many messages since Chemistry was almost over and I was done with all my work. I opened my phone to at least 20 texts about the school closing. My sister,  an educator texted me, “LAUSD is closing all schools because of this weird coronavirus thing.”

Oh, if only I knew what this would mean in the long term—that a year later I still wouldn’t be back in school. Two minutes later, Principal Griego came on the intercom and announced teachers would begin to assign us work that was meant to replace in-person instruction for two weeks. I felt annoyed because the last thing I wanted on my two week “vacation” was homework.

However, due to the fact that I’m an overachiever, I quickly realized that if I didn’t complete the two weeks of work, I’d probably fail.

The universe has a funny way of knowing things about the future, more than any psychic could. What a coincidence that same day my teacher would make an analogy that didn’t age well—about how when it rains, it makes you just want to stay at home and never leave. It makes you feel isolated. A forever rainy day was cast upon us when the stay-at-home order was set in place.

I vividly remember seeing the sky turn from blue to grey and then eventually go black that morning, almost like God knew what the rest of the year would be–rainy, cold, alone.

I went to my final lunch and am glad to say it  was spent with my closest friends. We danced in the rain and rejoiced at the fact that a two week vacation actually sounded nice.

We stomped in puddles and were transported back to when we were kids with no care in the world.

By the end of the day, it seemed as though the school felt like a ghost town, the beginning to a post-apocalyptic movie.

As I walked through the wet-tiled halls, people began emptying out their lockers, struggling to carry books in one arm while balancing their umbrella in the other.

I opened my locker, filled with books and notebooks, all contained by a pink shelf that I had gotten in middle school–my organized mess.

I stared into the locker for what seemed like ages. I had no idea how I was going to carry all of those books home. I stood there for ten minutes wracking through my brain trying to remember what books and notes my teachers said I needed.

As the mental list grew longer and longer, I began to imagine the 20-pound burden of books I would need to bring home, which made my backpack straps snap before I even put anything in it.

I rearranged my books and left with three huge ones in my hand. that I already knew would leave me sore before I even entered my brother’s dark green truck.

I closed my locker, turned the lock for the last time, then I heard my name. I turned around to see one of my best friends calling me to ask for a hug from across the hall.  She wasn’t a fan of hugs, but when I looked at her with a puzzled look, she said, “Come on give me a hug—I’m not gonna see you for two weeks.”

I leaned in for what would be my last hug from a friend I still haven’t seen in the past year. I gathered all my books and texted my best friend “See you in two weeks!” with a laughing emoji before heading down the stairs of the West Building.

As I walked to my brother’s car, I thought to myself that I would have to lug all my books back in two weeks to start normal school again, an inconvenience that angered me. I took my last steps on the Venice High campus as I got into the truck, with sore arms and wet hair.

This would be the final moment of normality before the year of madness began.

It was the last day of normality in over a year and yet, at the one-year mark of COVID-19 wrath.  It feels as though normality will never return.