POV: How Quarantine Allowed Me To Heal My Broken Mental State 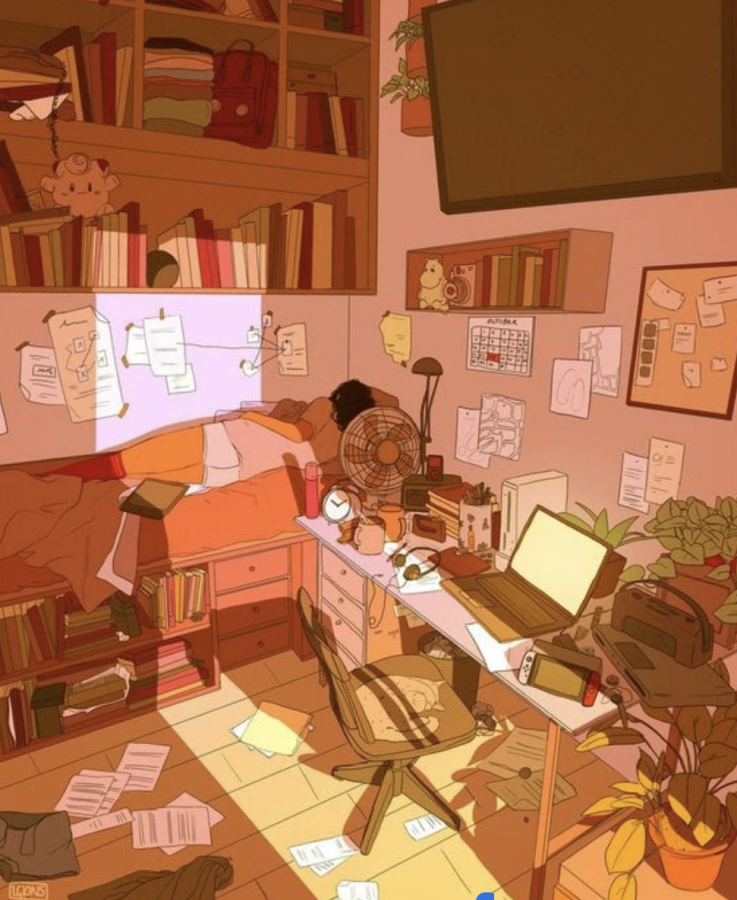 My last day of school on March 13 looked like me – trudging through campus, freezing in the rain, with masses of drenched and wadded-up tissues in my pocket, poorly attempting to get over the most revolting flu of my life.

I walked down Walgrove Avenue in the pouring rain, sick like a dog with no way of getting home dry. A white SUV splashed gallons of muddied sidewalk rainwater as I approached Washington Blvd– just like those movie scenes where the main character’s day could only get worse.

I had felt so alone, so utterly drained, so weak. Completely dead to the elements and the world as a whole. Willing myself to walk was a struggle almost too hard to bear.

It was crazy to my friends when I explained to them that the “me” at school wasn’t the “me” at home. Very hard to explain that the person they know and appreciate, the one who always grins and giggles and presents as pretty giddy on campus, was the complete opposite outside of Venice.

Funny how it all changed during COVID-19.

My depression diagnosis in August 2019 didn’t come as a shock to me, as my family and I had known of my feelings—my sadness—for a while. I’ve had the support from my family, been through all the therapy, but none of it seemed to work.

As I made the switch from my two years of online school in my 8th and 9th-grade years, my schoolwork saw the hugely positive effect physical school had.

Online school was hell. My grades have never seen worse days, I had been on the brink of failing more times than I can remember. But most importantly: I missed people. It was a dysphoric experience and I felt completely disconnected from reality. I already didn’t get out of the house much because of my depression, so I had been almost completely isolated.

Believe it or not, it was worse than distance learning is now. The work piled up fast, becoming unmanageable very quickly. There were even fewer live classes and there was no set schedule. Two-hour lunch breaks were nice, sure, but nobody held me accountable for my work like they did in physical school.

Lying about my progress became second nature. It served as my own intentional bubble of self-loathing and a catalyst for my failure complex. It was a big contributor to my depression spiraling completely out of control.

My first year at Venice as a sophomore, straight out of online school, I managed to get all As and a lone B my first semester.

I knew the second they announced online school in March 2020, that everything was, most likely, going to go downhill. School performance is a major part of why teens develop depression, and most teens can speak from experience to a mild case of anxiety from school.  Nobody without prior experience with online school could’ve been prepared for this massive mental challenge ahead.

While everyone else at Venice was cheering about a “two-week vacation!” or “a year off!” I knew what was to become of everyone’s reality.

I expected already it was not going to end well for anyone, including myself, and my last week of school had been hell enough already. It was flu season, and I had come down with it, bad. I couldn’t stay home because I needed to pick up my “two week” packets from my classes, not to mention attending for my tests alone.

After the original two weeks were up, and the extensions kept coming, my mental state was just in its normal dismal state. It was actually pretty relaxing not to have to force my smile every day—pretending got that much easier when hiding behind a screen.

I was at ease, but that didn’t magically fix my feelings. My family and I had already discussed possible medication, after the first process of therapy or journaling didn’t work.

So about two months after we were learning from home, we found a psychiatrist, and I was put on antidepressants. For most people they begin to kick in after taking them once daily for two or three weeks. For me? Six days.

That’s how imbalanced the chemicals in my brain were. And just like that, I felt…normal.

I had just been sitting in the living room with my mom when I noticed that the ever-present weight pushing down on my chest felt, somehow, lighter. I was less tired, my muscles weren’t tense, and oh my God, I hadn’t cried in three days.

Immediately after I came to that conclusion, I put my hands to my mouth in shock, and  tears magically appeared. I wasn’t even happy, I just felt normal. You don’t get a high from it as most people tend to believe. I just felt relief. My heart rate wasn’t constantly pushing 100 BPM, and everything was at ease.

I mean they do absolutely nothing for you if you are all balanced out, nothing.

But to me, everyone’s normal felt so weird.

I had so many questions.

“You guys get to feel like this all the time?”

“It’s NOT normal to cry every day?”

“How do you fall asleep without crying…?”

“How can you not be productive? This is fine.”

I could go on and on.

To be honest, when I first felt it kicking in,it was the first time I cried happy tears. It’s embarrassing, but it was as if I took the tinted glasses off and the world was being seen in a brand new light.

As everyone felt like they were greeted by their downfall, I was the only one still holding onto the mountain. In an absolutely grave time period such as COVID-19, my successes felt wrong.

It felt wrong to have my bubble of normalcy while everyone else around me was suffering.

As opposed to enjoying my clarity and prosperity, I put it to good use. I instead provided my struggling friends with insights, with advice—something I still gave before my medication, but only now was it true, genuine.

Before, the advice I shared might as well come from a book titled How To Cope: From Someone Who Can’t. Sure, I gave good advice and I still had intuition, but only now had it come from a place of honesty, where I actively practiced what I was preaching.

As COVID-19 was destroying people’s lives, it had acted as a period of restoration for me, a time of reflection and insight. This time to myself, away from people, (though I am a very social person and enjoy company,) has been really good for me.