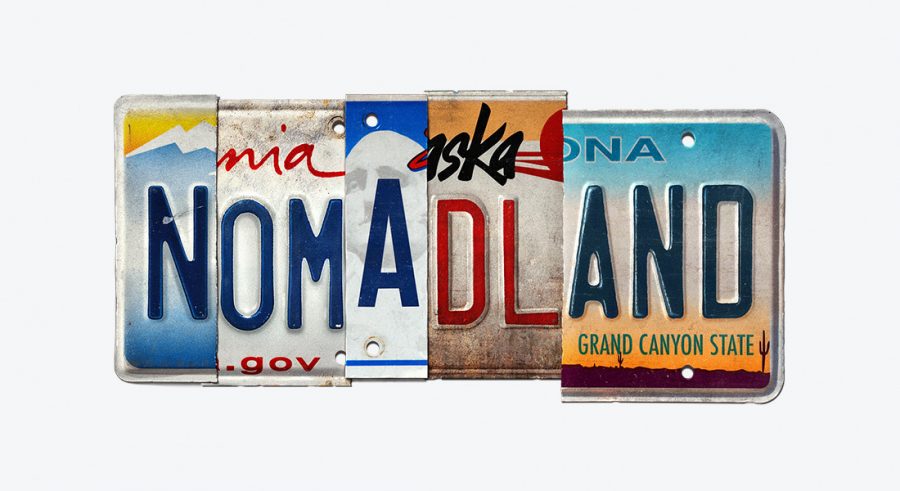 Gypsum—a mineral used in fertilizer, chalk, and drywall. It’s an element that you’ve likely never heard of, one you might even take for granted, unknowingly blocking out the unique quandaries that surround this substance. What is it made out of? How can you find it? Whose lives depend on it?

In 2011, in the small town of Empire, Nevada, a gypsum mine shut down. It’s a closure that stayed absent in most American’s minds, but it completely warped the lives of those living in Empire, a town whose tight-knit community relied solely on the work provided by the mine. Especially Fern and her late husband. So when it closed… everything changed.

The unfortunate reality of Empire sets the stage for this year’s Nomadland, the third feature film from the critically acclaimed Chinese director, Chloé Zhao. It’s a film that I easily think is the best of the year.

Nomadland begins with a brief summary of the events that happened in Empire, Nevada before introducing us to our main character, Fern. She is in the process of selling her belongings and purchasing a van to start her nomadic journey.

For those who aren’t familiar with the term “nomad,” it is essentially a synonym for a wanderer. It’s someone who is self-sufficient and who purposely doesn’t have a home; instead, they travel from place to place across the United States, seeing all the beauty that this country has to offer. Fern, although not entirely used to the label, is a Nomad.

Nomadland follows Fern’s journey from its rough beginnings, all the way to its profoundly gorgeous ending—from all the part-time Amazon jobs, to the tranquil tributes paid to fallen Nomads, to the defecating inside of a plastic bucket.

The film covers all of the essential, raw moments that a Nomad will experience at some point in their individual lives, exploring themes of loneliness, happiness, the human condition, and that of the purpose of life itself…and I absolutely adore it.

An aspect I love about Nomadland lies in the aforementioned “main character” label I handed to Fern. I hold major issues with the connotations of this phrase, but fortunately, these issues directly showcase the profundity of Nomadland.

No one is a “main character” in Nomadland. There are no side characters, no extras. No one is defined by the cinematic classism we’ve all grown used to. Everybody is equal; everyone matters in Nomadland.

Nomadland is not a physical place, rather a metaphorical state where people connect with themselves, evaluate their lives, and become one with the world around them. For each person we are introduced to, we are reminded of the lives they lead, the struggles they face; we’re not able to subconsciously determine their significance in the story, because they’re all significant.

These people, like the fleeting faces we see walking past us on the street, all matter. Zhao knows this, and through her direction she embodies the magnificent importance of people, those whose worth or significance isn’t determined by their place in a film, or the role they play in their lives—it’s by the fact that they exist. You might not know them, you might not see them, but they, just like yourself, mean everything.

Nomadland never quite feels like a “movie.” Throughout its deserving 107 minute runtime, the thought of a traditional “movie” never quite came into comparison. Nomadland felt more like an experience rather than a film. That isn’t a very unusual label to attribute to certain movies, but Nomadland still felt different. It’s much more similar to a “personal, cinematic documentary” than a film.

What heightens this overwhelming feeling is by far the acting. Frances McDormand is phenomenal as Fern. It is by far the most realistic performance I have seen this year, perhaps in my entire life. The way she handles the dialogue she’s given, which I have a sneaking suspicion is mostly improvised, provides the viewer with an authentic portrait of who she is.

From her wry grins to her melancholic sighs, each action, each word McDormand says holds an eternity of meaning. She acts as a gateway to Fern’s lasting heartache, her pain, and her ever-so-sweet happiness.

This is the same with the rest of the characters in Nomadland, who aren’t even characters. The majority of them quite literally playing themselves, being fellow Nomads and locals alike, and saying things that they would normally say. The acting, and the dialogue, in combination with the raw, up close and personal way the film is shot portray life in all of its genuine triumph and hardship, which never, ever, feels fictitious.

Since the start of the COVID-19 pandemic, the better part of this world has had to remain inside. Watching our lives unfold through actors on a screen. Our dreams being postponed until further notice. The beauty of our world slipping through our fingers and under the tread of our tires.

One of the last aspects of Nomadland that I loved was how it reminded me that our lives aren’t over, and we can have our beginning whenever we want—despite the circumstances we all have to face. The way this poetic message was conveyed to me is not only because of the story, but also the mesmerizing cinematography. Joshua James Richards’ cinematography often feels like photographs from auteur photographers on a quest to capture the individual glamour of life.

Nomadland is painted with gorgeous wide shots of the underappreciated Americana, similar to that of films by Kelly Reichardt or nature documentaries, encapsulated by the sunsets behind the Joshua trees, the dry open fields of the Midwest, the bright yellow views of the sky. The picturesque long shots, juxtaposed with the personal, shaky shots of Nomads and even regular people—showcasing the blessings of our earth next to the blessings of our creator. These are all details that I wholeheartedly loved—all beautiful and adding to its experience.

As the award season approaches, Nomadland will likely, and has already, secured many triumphant wins. But I think the effect Nomadland will have on the film industry will not be contained by a few awards and some good reviews. Nomadland’s impact will stay and we’ll likely see it very soon, because of the type of film Nomadland is. You’re not able to pinpoint its genre, nor its message, but what you are able to determine is how it made you feel.

After Nomadland, I believe that cinema will slowly start to resemble these types of films where realism, experience, and feeling, are of the utmost importance. Movies will start to stray away from traditional narratives and opt for more personal, non-linear, indie films, where we live vicariously through a character whose world is the same as ours.

Some characteristics of what these films may hold are that of an overwhelmingly gorgeous look, influenced by nature, photographs, and daily life. A lack of specific dialogue, much more improvisation and method performances, and less and less of a reliability on cliches. The personal will be used to influence stories. Films won’t have to check all the boxes to make you feel something, they inevitably just will.

Chaotic, uncertain, anxiety-ridden energy has encompassed every month since early 2020. We needed calm, tranquil beauty that shows us all of the life we still have left to live, and the importance of every single person that exists on this earth. We needed to be reminded that we can conquer our hardships, find happiness within ourselves, and enjoy every moment life throws at us, because one day it’ll be gone.

We need to get into our vans and drive, drive until the yellow line in the middle of the road will fade into pink sunset, into the eternal white light… and you won’t be in Nomadland anymore.