POV: Please Get Vaccinated. Thank You. 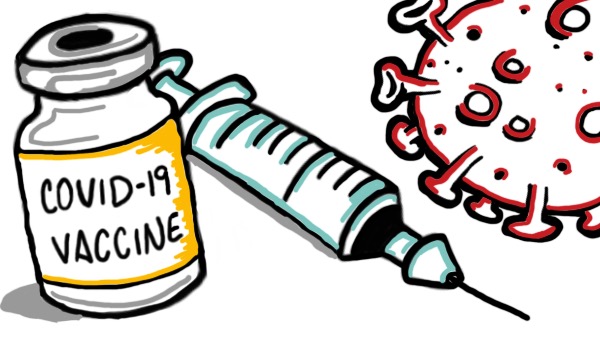 Getting vaccinated was not as bad as I and others thought it would be.

Facebook was spreading the usual “government is tracking us” information, Instagram was showing out-of-context videos of people fainting after getting vaccinated, and social media, in general, was making it seem more than it actually is. I was just scared of whether it would hurt or not.

When my mom told me when I was getting vaccinated, I panicked a little bit. I’m not good with needles and I usually get sick after getting shots. On top of that, the appointment was at 7:40 in the morning—but I needed to be there by 7:25.

My first dose was given to me on April 1 during spring break through my hospital. Thankfully because of the fact my appointment was early I didn’t have to wait too long. There was a fairly short line outside the clinic where I had to sign a medical card and form before going in. After that, yet another line to actually receive the vaccine which lasted about 15 minutes.

At least they had whiteboards with cute smiley faces telling you the way. I was called over to one of the little bland booths and was given my vaccine as well as a paper about the vaccine.

After receiving the vaccine I was given the date for my next appointment, and I was given a small packet about possible symptoms to read while being monitored in my taped square with a chair. That was about another 15 minutes. The whole experience was a little over an hour long. The second dose went about the same way. My next appointment was 3 weeks later on April 22nd. The line was way longer but it went by a bit faster and efficiently.

Overall, both appointments weren’t as long or as bad as I was expecting them to be. After the first dose, my arm was sore for about three days, and I got a killer headache two days after the vaccine.

After the second dose, I just had a sore arm for about two days. Thankfully, I didn’t get any of the worse symptoms. Some people may get worse symptoms than me, but the worst one listed on the packet was muscle ache and a fever.

The vaccine itself didn’t hurt either time, which was definitely good as someone who doesn’t like needles. I also didn’t ever feel really sick after either dose except for the headache.

Of course, everyone is different, but don’t be scared to get the vaccine. It’s not as bad as some people may make it out to be.

Getting vaccinated feels like getting over a year’s worth of paranoia is being lifted.

I can go out without so much worry, no more worrying that a cough is COVID, and a step closer to being reconnected with the outside world in general.

I’m sure many others, want this pandemic over, so please get vaccinated. Thank you.