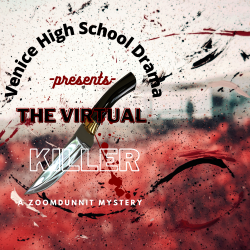 The play is available to be watched from Monday, June 7 through Monday, Jun 21.

Andrews said the show was inspired by a board game she played over the holidays. It was the murder mystery game Clue, with the twist being that it was all done over Zoom.

These circumstances got her to start thinking and eventually develop a play focused on the idea of a Zoom murder mystery.

Andrews also expressed the fact that the experience created a unique bond between herself and her young actors, allowing them to become a close-knit group. She said that those who could not be friends in person were able to create a close bond with each other.

Putting on a traditional theatre production is hard. The fact that the show is online added challenges, Andrews said.

“Putting on theater is one of those things that you can’t do when people are missing or somebody’s microphone doesn’t work,” she said. “And it just added another layer of difficulty.”

Freshman Breanna Ramirez, who plays Emily Chapelle, a posh and spunky influencer staying in quarantine before the mystery party, said that it was unique acting through Zoom.

“Putting on a show through Zoom was new to us all considering the situation we were put in,” she said. “It allowed us to realize that anything is possible even when the circumstances revolving around us are new and unfamiliar.”

The Zoomdunnit mystery will go down in Venice history as a revolutionary performance. With that comes excitement for what Venice High School will have in store for the community come the 2021-2022 school year.