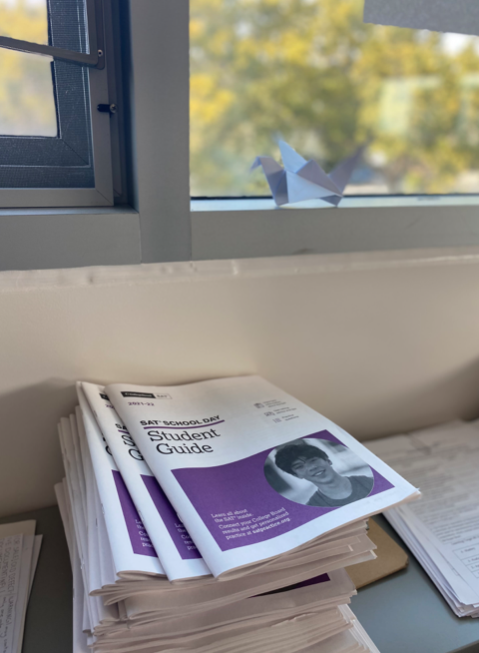 Venice High will administer the SAT and PSAT to students tomorrow.

After the COVID-19 pandemic, the question on whether or not the SAT is truly necessary has never been more prevalent. While some students chose to opt out of, many did not.

“The SAT is not an achievement test—it’s an ability test,” according to counselor Heather Brown, Venice High’s SAT coordinator. “A test on how well you take the test itself.”

Inequality and accessibility has been an issue when distributing the SAT—and the issues have only been made greater during quarantine, according to Brown.

“Its original intention was so that it could equalize the college admissions process—it was supposed to be the great equalizer and give everybody a fair and equal chance of getting into all the universities,” Brown said. “What has happened over time is that the SAT has become the great chasm, creating a huge inequity in college admission and access.”

With many students who did not take the exam in 2020, the COVID-19 pandemic served to show positive changes in the college application process, Brown said.

“We saw lots of positive data coming out of UCs, Cal States and other kinds of schools, astonished by how many people from low income families, first generation families, color-underrepresented students had applied in great numbers, who were qualifying as far as GPA and extracurriculars,” Brown said.

Brown also pointed towards holistic multiple measures being a factor in the admissions process, meaning taking things besides GPA into account when determining admissions.

The SAT and the results surrounding them can be discouraging, but it only serves to benefit students’ scores by taking the exam multiple times, Brown said.

“Typically, if you take the SAT multiple times, we usually see an increase in scores just by being used to it,” she said. “Because it’s the aspect of time that really gets people stuck and because there’s no other test that is so timed in such a way.”

Whether students truly need the exam in today’s day and age, Brown said, “I don’t think it hurts students to opt out when applying to the California schools.”

If applying out of state or out of the country, it would be wise to take the exam as a precautionary measure, because not all universities will share California’s “test blind” approach to college admissions, Brown said.

The idea of not taking the exam is still very new to students, as the SAT has historically been a large stressor for high schoolers. Many of these student’s parents have taken the SAT, and still struggle with the fact that it’s simply not as important anymore.

“There’s a cultural anxiety to the test, especially with parents, and I think that that’s a leftover kind of residual like anxiety,” she said. “So it’s really hard to believe that you don’t need it.”

Senior Zion Salazar said that he understands the importance of the SAT, but he doesn’t think it’s a good representative of the student as a whole.

“At the end of the day it doesn’t determine how smart you are, you know,” he said. “It’s a test that involves math, but not real life thinking.”

Salazar questioned the importance of the test, and how it can have a negative effect on students who struggle taking exams.