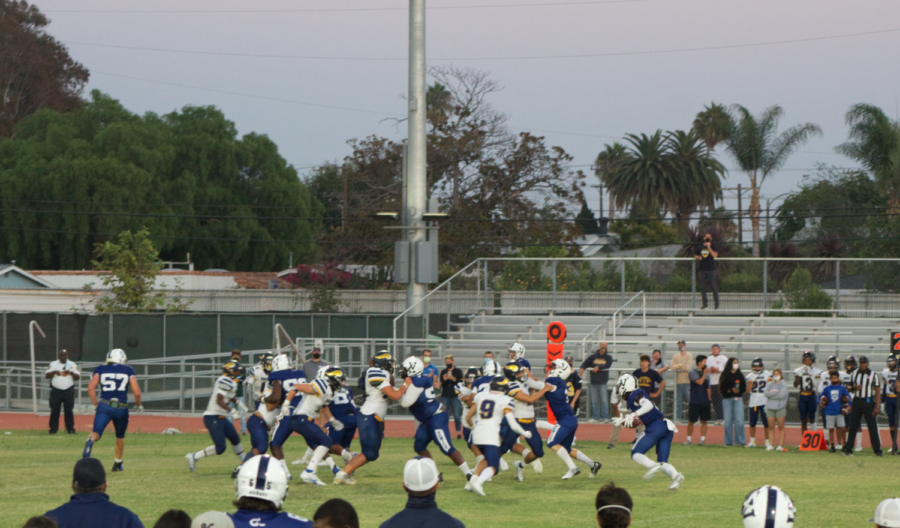 A memorable 47-12 win over the Fairfax Lions in the highly anticipated Homecoming game marked a historic day for Venice High football.

The Homecoming game is always a major occasion for the entire Venice community—a bonding experience for everyone from the current students and staff to the alumni and their families.

This year’s game October 8 was no exception, as the stands were completely filled and the entire stadium was booming.

The game started off seemingly slow, but the spirit and skill of the hosts thickened the air as the team managed to keep a leading score throughout the game.

The roaring chants from the packed stands filled the stadium, signaling to the Lions that Venice intended to win it all.

The night was filled with many more exciting activities, including the Homecoming Court and fundraisers set up by various student groups.

As per tradition, before the end of the game, the seniors were given the spotlight. The entire school wished them the best of luck in their future lives and careers, adding that Venice is proud to have had them represent the school.

It was the first game Fairfax had played in almost a month due to COVID-19 protocols. The Lions’ coach, Juan Solorio, said that regardless of the outcome, the entire team was grateful to be back on the field.

“Both programs were victims of COVID-19, and we’re just happy to be on the field,” he said. “Sometimes just getting out on the field is the goal, and we accomplished that goal today.”

Solorio said he feels optimistic and looks forward to the bright futures of both teams.

“Both programs are going to move forward, and hopefully get into the playoffs and make a run,” he said. “So best wishes for the team, for Venice, and best wishes to Coach Angelo.”

For the Gondos, the win was especially important since it was the Homecoming game and the last home game of the regular season.

The students’ eagerness to attend the game was visible by the length of the lines to purchase the game tickets at school.

Dozens of students lined up at the student store during nutrition and lunch, forming a long line that ended near the entrance to the covered eating area.

As a result, the tickets, which went on sale Tuesday before the game, were completely sold out by the end of Thursday.

The Gondos fanbase is not only limited to students and school staff. Many other members of the Venice community are also passionate about cheering for their home team.

Among those fans was Darris Love, the brother of senior Robert Lamar, a linebacker. He said that he feels proud of his little brother.

“I pray and make sure he doesn’t get hurt,” he said. “At the same time I’m filled with joy.”

Junior Ryan Carlow, who had only attended one game prior to the Homecoming game, enjoyed his time. “It’s actually really fun,” he said. “The players seem very good against Fairfax. Overall it’s been great.”

The night will forever be remembered by fans, especially since last year’s homecoming game was canceled due to COVID-19.  The magnificent win shows that the legacy of Venice football continues thriving even after a global pandemic.