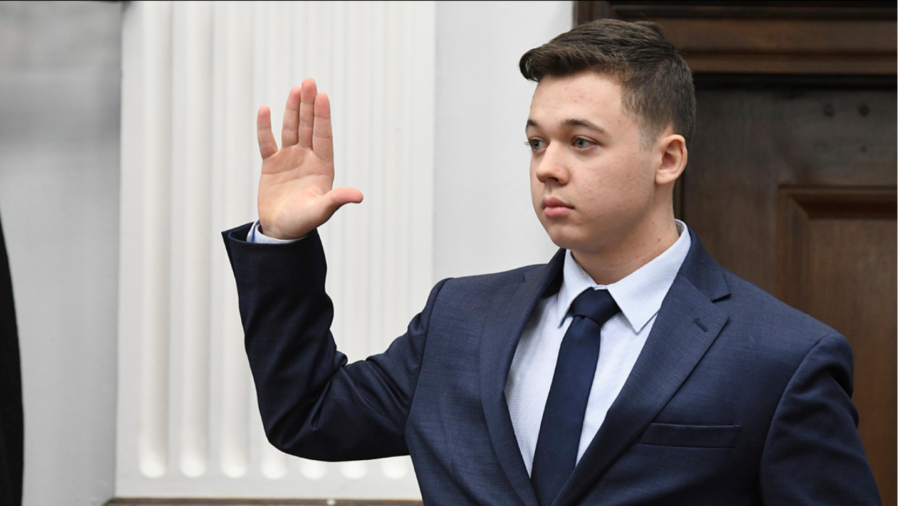 Another day in America goes by where white privilege allowed now 18 year old, Kyle Rittenhouse, to be put on trial for seven charges, including first-degree reckless homicide, use of a dangerous weapon, and first-degree recklessly endangering safety, without being held accountable for any of them.

Rittenhouse, 17 at the time of the murder, was found not guilty by the jury on all seven counts he faced. Had he been found guilty, he would’ve faced up to 60 years in prison. The result of his trial has struck fear in countless hearts. People of color are forced to go through every day knowing the privilege of a cis white man is so powerful all they have to do is fake cry in a court room with a rehearsed script to get away with what most people would agree is murder.

At his trial, he tried reasoning that shooting Rosenbaum was an act of self-defense. He testified and said, “If I would have let Mr. Rosenbaum take my firearm from me, he would have used it and killed me with it and probably killed more people.”

Rittenhouse’s most serious charge that would’ve ended in a life sentence (had he been found guilty), was first-degree intentional homicide. Rittenhouse shot Huber with intent to kill him because he swung his skateboard at him. After fatally shooting Rosenbaum and Huber, Rittenhouse testified he saw Grosskreutz jump towards him and aim a gun at his head. Rittenhouse fired, injuring Grosskreutz. In court, Grosskreutz testified that he only pulled out his own firearm because Rittenhouse was actively shooting and had seen him kill Huber and Rosenbaum.

Once again, America’s government shows how it truly was built to benefit the white man. Not only since Rittenhouse’s trial, but long before many have begun to realize a pattern in the justice system. People who look like me are constantly targeted and charged much more severely than people who don’t.

Black Americans only make up approximately 12% of the population, with about 33% of them in prison. This makes them almost six times more likely to get arrested than white people are. Statistics have shown that one in four black men can expect to be incarcerated at some point in their lifetime, compared to the white male being one out of twenty three, and Latino men being one in six. Statistically, men are more than eight times more likely to go to jail than women, giving them a 1.1% chance of incarceration in their lifetime. However, black women are three times more likely to go to jail than a white woman, with a 60% increase of African American women in jail since 2000.

Countless cases where people of color were convicted (of much less serious crimes than murder) resulted in them being put in jail for years. Earlier this year, Allen Russell, a 38 year old black man, was sentenced to life in jail without parole, simply for marijuana possession. Whereas today still, in 2021, a white man can commit what any sensible person would consider murder, and get away scot-free.

As a black woman, I’ve always had to question my safety in certain situations, but after the ruling of Rittenhouse’s case, I’ve started to question the safety of my activism when attending protests. Hearing of two white men dying at the hands of another, at a protest for the unjust shooting of black man, Jacob Blake, by a white police officer, is incredibly fear-inducing.

On Friday, November 19, 2021, justice was not served. In no country should anyone be allowed to get away with killing someone who’s unarmed.

Since the verdict of Rittenhouse’s trial has been announced, it’s even harder for people of color to feel safe in America, knowing that they’re more likely to get arrested for a minor crime than a white man is to get away with killing.