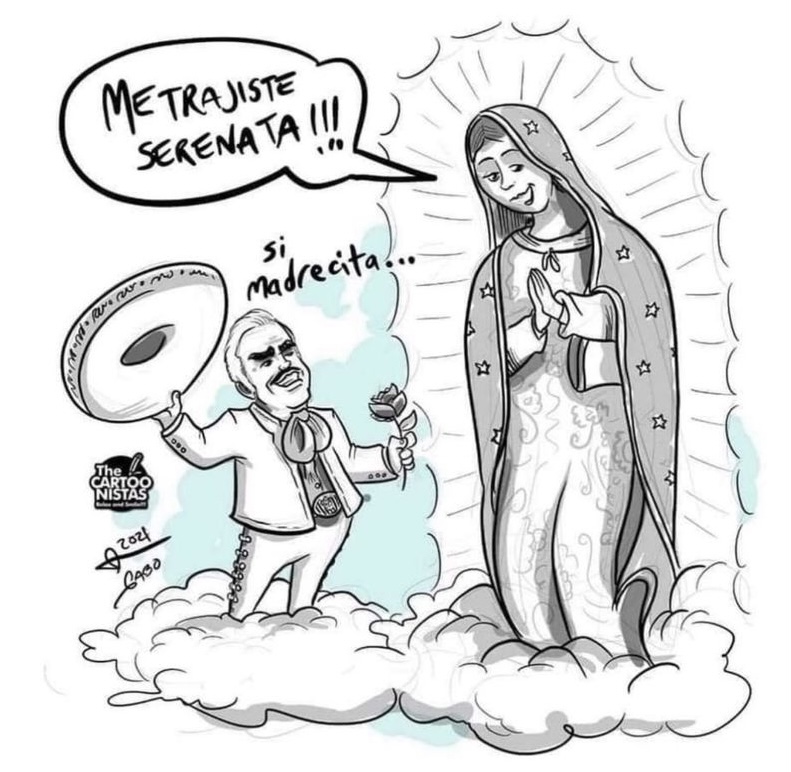 On a day of celebration in Mexico, the news that Mexican cultural idol Vicente Fernandez had died shook the Latino community to its core. At 81 years old , the singer known by most as “Chente” passed away on the day that was meant to honor the “Mother of All Mexicans”, La Virgen De Guadalupe.

This left thousands of Mexicans feeling conflicted on whether they should rejoice on their “mother’s” feast day or if they should cry in agony at the death of their hero.

As a semi-religious person, I couldn’t help but notice the day he died—12/12/21. On arguably the biggest religious day for Mexicans, the biggest name in all of Mexico was gone. His date of death was almost entirely 12s: even the time he died added up to 12, which in the Catholic religion is seen as a God number (because of how many times the number appears in the Bible).

It makes you wonder if this was some sort of sign for Mexicans, but what could it mean?

While I may not have listened to every song or watched every movie, it’s safe to say that Chente defined my childhood. It felt surreal to hear that he was gone because he had been such a constant in my life for nearly 18 years.

I’d listen to his version of “Las Mañanitas” every year on my birthday, or I’d hear his music while I drove around with my family members on Sundays, and at least once a day when I’d go in the kitchen to eat dinner.

Chente had been a constant in my life since I was a little girl, so knowing he’s gone seems like a dream. As I scrolled through Instagram, I saw my feed flooded with pictures of him and couldn’t help but feel sad—until I saw a picture that had me on the verge of tears.

In the artwork, you can see Chente with La Virgen, and she asks him if, for her feast day, he brought her a serenade. “Of course!” he replies.

It made me feel relieved to know he is in a better place, but it also hit me with the reality that Chente is actually gone.

While he may be gone, his memory will live on forever in the hearts of Mexicans all over the world. With imitators (who would dress up as Chente himself and sing his songs as a tribute), movies, and so much more, it is safe to say that even after his passing, Chente will be known worldwide for years to come.