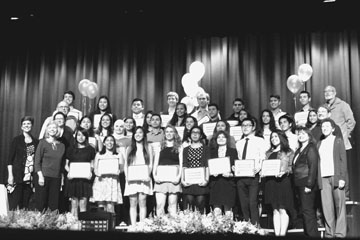 Seniors were awarded for their accomplishments on Thursday, May 22 at the Venice High auditorium. At the annual Senior Awards Night, scholarships and awards from various organizations including over $130,000 in scholarships from VHS Alumni Association, and others from PTSA, Venice academic and athletic departments as well as national and community organizations were awarded to seniors.

At the awards ceremony, 73 students were honored with a gold tassel, 81 with Silver Tassels and 42 students got wrapped in gold as Roman Lampers.

The class of 2015 Valedictorian Lisa Sobajian and Salutatorian Jae-Hyun Ha were both recognized and awarded with a medal. The California Scholarship Federation also recognized both of them for exemplifying the CSF motto “Scholarship for service.” Sobajian won various different scholarships and awards for her excellence in academics, community involvement and extracurricular activities. She was awarded a $20,000 scholarship from the Coca Cola Company. Sobajian was also the recipient of the Humanitarian Awards for COBA.

Three students received recognition from the Phi Betta Kappa Alumni Association. Seniors Sheila Fallah and Sobajian were selected to be recipients for Associated Administration of Los Angeles and were awarded $2,000 each. Five other students were awarded scholarships from the local chapter of the Association of Mexican American Educators.

College Counselor Nilou Pourmoussa said that she is proud of the seniors “for working diligently all four years” and that she “wishes the best for everyone.”