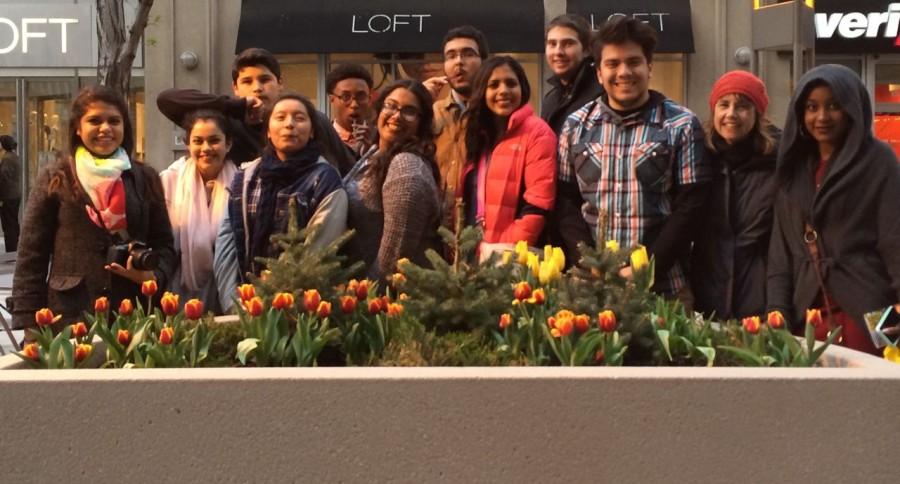 Four out of the 13 members on the Oarsman staff who attended the National High School Journalism Convention in Denver, Colorado April 16 to 19, had never been on an airplane before.

“I was praying for dear God because I was scared because someone told me a story about a plane crash,” said junior Jacob Jimenez. I, on the other hand was calm. The view was very beautiful with clouds everywhere and snow all over the Rocky Mountains. It took us about two hours to arrive at the Denver Airport.

The Sheraton Denver Downtown Hotel was very luxurious with a beautiful view full of tall buildings, snow, and lights everywhere. The queen-size beds were very comfortable and the fresh clean blankets and sheets every morning were awesome.

At the convention, some students learned about how to report on sexual assaults on school campuses.

“I belve that attending the seminar really helped us distinguish what’s right and wrong in our own relationships, as well as ethically as a newspaper,” said editor in- chief Harry Phillips.

On Friday, the 13 students attended workshops to help them better the newspaper and help them become a better staff to be able to communicate with each other without being misunderstood. Raul Magallanes and Joseph Medina both attended ” Swap Shops,” where different editors from different schools looked at our newspaper and gave them advice on how to better it.

“They it looks very professional because of the way it’s laid out and they also said they liked our variety of stories, ” said Medina.

Friday was nerve-wracking for some Venice students who competed against hundreds of other students in write-off competitions or photography competitions. Sadly this year we didn’t win anything but everyone put in their best work and did as good as they could. After the competitions, we went to the outdoor swimming pool. It was 48ºF outside, but that didn’t stop some of us.

Saturday we continued to attend different workshops. Our free time was well spent exploring downtown Denver, doing some window shopping for some of us and actual shopping for others.

We also walked to the state Capital in Denver. It was big and beautiful. It literally looked like a castle. We also went to have dinner at “The Hard Rock Cafe.” This was a super busy restaurant but very tasty. We ended our night by walking around with Ms. Nancy Zubiri to see the big Blue Bear on 14th Street.

This trip was a great experience for everyone since none of the Venice students had ever been in Denver. The students who attended were Amiah Woods, Cinthia Hercules, Jennifer Sanchez, Aranza Naguanagua, Kimberly Velasquez, Martha Velasco, Samantha Alanis, Chad Sherriff, Jimenez, Medina, Magallanes, Phillips, and myself.

Next year the National High School Journalism Convention will be held here in Los Angeles.