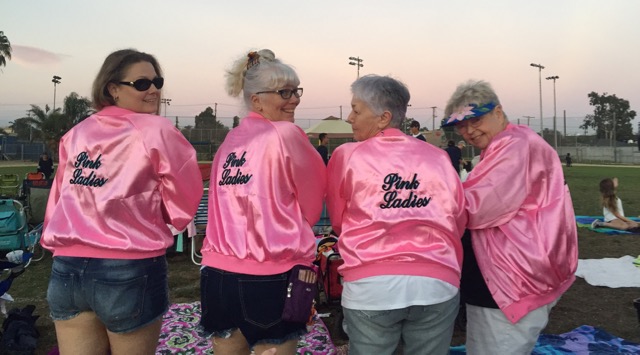 Grease fans dressed up as Pink Ladies at Grease Night Sept. 26 on the football field.

Saturday night, Sept. 26, was the night to be at Venice High School to watch the screening of “Grease” presented by the Venice High Alumni Association. It wasn’t just to come and watch “Grease,” it was also to support, and help school clubs raise money.
The community event started around 4:00 pm. This was the fourth year that the Alumni Association hosted the “Grease” event. Clubs provided a vast selection of food from tacos, to brownies, drinks, chips, snow cones, cotton candy, and even popcorn for people to enjoy while watching the movie.

Teachers, friends and families came out to watch “Grease.” It was for all ages and it was free. They did spend some money, but it was for food and snacks.

Some of the people who came out to watch “Grease” were former students from Venice High School. A few people came dressed up, some as Pink Ladies and others as T-Birds. Venice High the location for the movie, filmed in 1978.

The movie began around 7:45 pm when the sun was setting. People sat in chairs and on blankets. Parents called their kids and told them to sit down for the movie. Right as “Grease” started, people began to clap. Everyone sung along with the words on the screen.

At the end of the movie, everyone cheered and clapped.

“I enjoyed Grease Night, and had fun singing along with Danny Zuko as he tried to win Sandy’s heart,” said junior Alyssa Zarzosa.