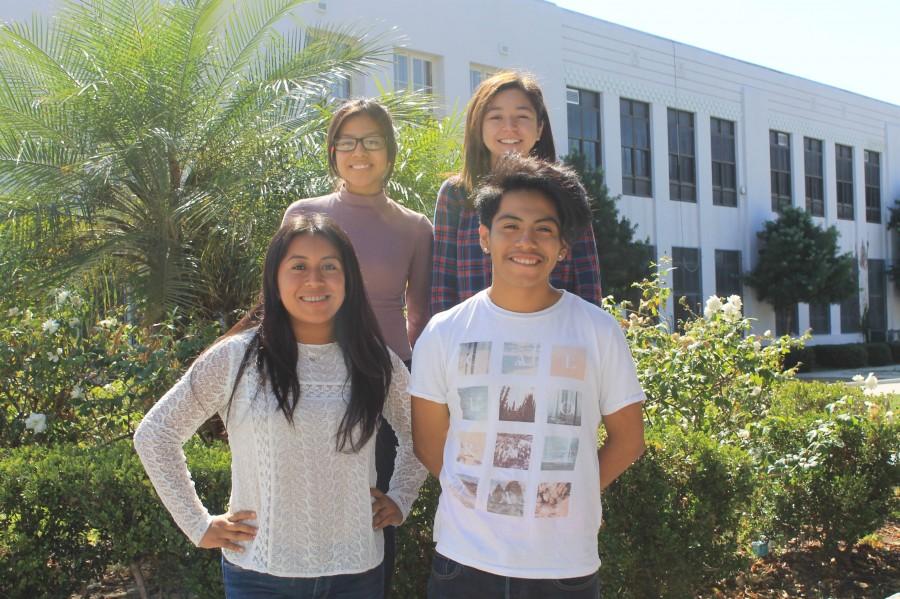 The Associated Student Body (ASB) polls are in!
This 2015-2016 student body elected Senior Juanito Hernandez for President, Senior Angie Maximo for Vice President, as well as Senior Pamela Hernandez for Treasurer and Senior Laura Antonio for Secretary on October 16.
Maximo, Pamela Hernandez, and Antonio all ran unopposed, but still faced some challenges while running.
“Certain individuals made me feel like I wasn’t a good candidate for the position I was running for, but I believed in myself. And I knew that the changes I would make during my term would prove them wrong,” said Maximo, “but overall, I felt confident in myself.”
When asked why she wanted to run for treasurer Pamela Hernandez said, “I wanted to try something new and I wanted to be more involved in my school.” As treasurer she said she will make sure the money is spent on things that are truly needed.
Antonio wanted to run for secretary because she wanted to give back to her school and make the best out of her senior year. As secretary, she said she will try to keep leadership on track with what they are supposed to be doing and have input on important decisions.
The team’s main goals for this school year is to give the whole student body a voice and improve school spirit, as well as improving their individual leadership skills.
President Juanito Hernandez ran against Jesus Guido and Tyanni Gomez. Hernandez earned 546 votes, Guido earned 397 votes, and Gomez earned 357 votes.
When asked why he wanted to take on such a big role with lots of responsibility, Juanito Hernandez said that he wanted to raise the school’s spirit and make changes throughout the school. He also wants to try out ideas that have been talked about in the past but that have not been done.
Hernandez says he walked around campus speaking to students and letting them know that he was running for president.
“Some students didn’t even know what ASB was,” he said. Hernandez believes it is important to spread the word about the elections and ask students what types of changes they want to see around the school.
“It’s good to talk to different grade levels and different group of people because it gives you different ideas and perspectives,” said Juanito Hernandez.
When asked what his goals are for the school year, Juanito Hernandez responded, ”My number one thing is to raise school spirit. I read the Oarsman article that Raul wrote, “Where is the school spirit” and although some people hated it, I really like it. That story really got to me because is it true and that’s what I’m here to change.”
Weeks before the elections that took place on Oct.9, Venice High School was filled with posters and flyers put up by the ASB candidates with catchy slogans to get students’ attention and let the school know that they were running for a leadership role in ASB.
In order to run for a leadership office, students had to fill out a packet that requires reporting grades, number of absences, work habits and cooperation and must get two letters of recommendations.
ASB is in charge of organizing school dances, pep rallies, spirit week, among other things.