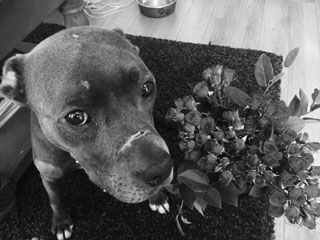 Most people have someone or something that they care deeply about. In Finneus Egan’s case, that is his dog, Lucy. When she escaped while he was on vacation in Europe, he was devastated. 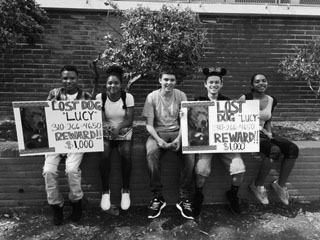 Egan got the entire Venice community, including Venice High students, involved in the search for the lost Lucy.

Venice High juniors Julio Jimenez and Ryen Davis were waiting for their rides after school with a couple of friends when Egan and his girlfriend, Dr. Antja Hinz, approached them.

“We took a couple pictures with the signs of Lucy,” said Jimenez. Egan later put the photos on the Facebook page created to find Lucy. “They [Egan and Hinz] said that it brought the community together.”

On Sep. 8, Egan and Hinz found out Lucy got out while she was staying at a pet sitter’s house on Venice Beach. “Lucy decided to take her own vacation and she took off because someone accidentally left both the front door and gate open,” says Egan.

Egan and Hinz had adopted Lucy from the East Valley shelter in March of 2013. “We adopted her because she was so shy, scared and sweet. We knew she needed love!” Egan wrote to the Oarsman. Lucy was a huge part of Egan and Hinz’ lives. She was family.

They found out through a phone call a day after she got out. They cut their vacation short and came home as soon as possible to search for their beautiful grey Pit Bull-Staffordshire mix.

Thankfully, after three weeks of endless searching, the couple found her.

“With enormous support from the Westside community and beyond, we eventually got some tips on social media to her location. After being spotted in Culver City, I drove to a nearby neighborhood in which Lucy came out of a hiding spot upon calling her name. She ran into my arms. It was beautiful!” texted Egan.

Though Lucy was extremely happy to be home, she had many physical wounds. Egan wrote, “Lucy has possibly gone through some of the worst experiences anyone could ever imagine. Yet, she seems just as sweet as when she was lost.” She is now home and healing tremendously.