It Doesn’t Take Years and Years To Find Good Music 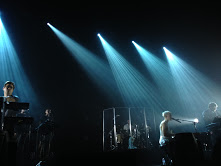 Years & Years, an electronic dance band hailing from London, electrified a sold out LA crowd when they played the Wiltern Theater on September 30.

“How do you guys even know about us?” Olly Alexander giggled as he asked the crowd.

Alexander swayed the crowd with his infectious voice and dance moves, while Emre Turkman and Mikey Goldsworthy were on the synths.

They were comfortable as if they were playing a hometown show, while they opened with the first song off their album called “Foundation.”

Electronic music has started to gain more and more popularity over the past couple of months.

Big name acts are transforming their sound while the majority of the best upcoming acts are rising from all over the world.

Years & Years’s music is described as dance music that you can cry to.

Communion debuted at number one on U.K. official charts and the U.S. Billboard Dance/Electronic Charts.

The 17-track album is filled with love ballads of feeling lost and some songs that can be sung at the loudest level.

At the Wiltern the band performed their biggest hits, “Take Shelter”, “Desire” and “Shine,” while the crowd roared the lyrics.

These guys know how to put on a good show.

It showed a different perspective of an artist.

The music artists create reflect themselves and their experiences.

Alexander tells his experiences through some beats and a heart.

Years & Years closed the show with their hit single “King” which skyrocketed to number one on the U.K. charts in March.

The passion felt in that theater was something only those people who witnessed it could talk about.