Venice Football knocked out of playoffs 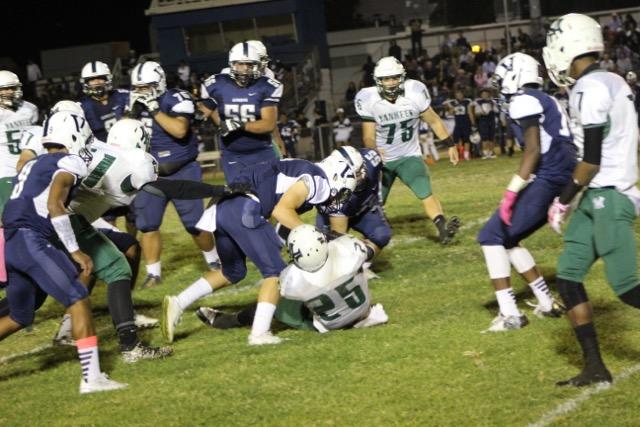 #16 Carlos Peterson run the ball against the Hamilton Yankees on Oct. 30.

The Venice High football team finished their season with a 5-6 overall record, becoming Western League Champions  for the 13th time in 14 years, and making it to the first round of playoffs against Arleta on Nov. 7. The Gondos were defeated by Arleta with the final score of 42-28

A 15-22 loss to Hamilton on Oct. 30 forced the boys to work hard to get the 45-12 win against University at Homecoming to get seated well in the CIF LA City Section playoffs.

The game against Arleta began with a touchdown by Dejean Parramore, and the first quarter ended with the score of 7-7.

Chris Dormer had a 62-yard touchdown in the second quarter, making the score at the half 14-14.

With Arleta scoring at the beginning of the third quarter, Jacob Lusk made a 10-yard sac, forcing Arleta to turn the ball over on down. On the kick return, Skye Germaine ran a 98-yard touchdown, ending the third quarter with a score of 21-21.

“Everybody played their hearts out and came together at the end to make it to playoffs, but sadly it was cut short,” said Germaine.

Beginning the fourth quarter, Arleta completed yet another touchdown. Pierce McLurkin slowed down their momentum by recovering a fumble with 7 minutes left in the ball game. Parramore scored again in the game one last time. 6q

“Doesn’t feel good with the season ending, because it is my last game at Venice, but I am going to move on to bigger and better things.” McLurkin said.

Arleta scored one more time before making a big interception to end the game with the score of 42-28.

“Doesn’t feel good with the season ending, because it is my last game at Venice, but I am going to move on to bigger and better things.” McLurkin said.

“It’s always sad because it’s abrupt,” said Coach Angelo Gasca. “The hardest part is saying bye to the seniors and knowing we’re not going to be together as this team anymore. It is obviously disappointing to lose but it was a very successful season. We improved throughout the course of the season. I am proud of our effort and accomplishments.”

“My goal for next season is to continue to become better people on the field, better students, respect other people and the schools rules,” said Coach Gasca. “I believe by becoming better people, playing good football becomes the easiest part,” he said.

“I have always said by being better sons, brothers, and students, everything in life becomes easier, like football, because of the love for it,” said Coach Gasca.