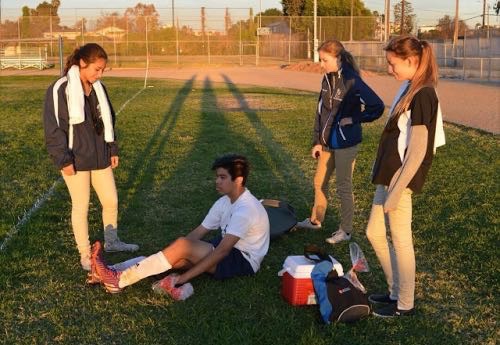 The Sports Medicine team prepares to act on an injury.

Student athletic worker Mary Soliman joined the team this year and is in the seventh period class for her first time. She learned new taping skills and what to do in an emergency during a game, meet or match.

“We learn not only how to help sports injuries, but also to help in regular emergencies like in earthquakes,” said Soliman. “Each injury has a certain technique of taping.”

Team members also had to attend summer camps for the class and had to take a taping test. The team also participates in annual competitions.

According to the team’s website, venicesportsmed.org, the students are required to learn and master basic first aid, taping, massaging, splinting, icing and rehabilitation.

Soliman explained one of the worst-case scenarios that Sports Med team faced this year. It was an injury during the football game against Garfield High.  The Venice player suffered a hard blow that broke his leg bone, which punctured his skin. What the sports medicine team did was stabilize the leg and attempt to stop the bleeding. The ambulance came soon after.