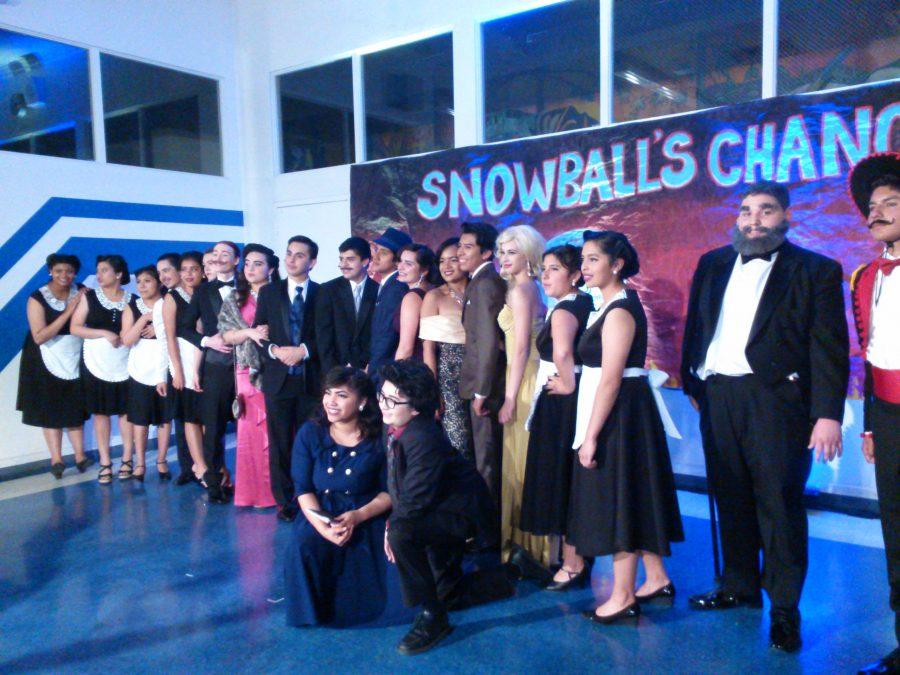 On the night of April 22, “Her Lips are Sealed”, debuted in the school cafeteria as a mystery dinner.

Drama Director Traci Nicholas-Thrasher and the cast did an excellent job in performing a theater dinner show with a storyline full of mystery, comedy and shocking moments. The $25 ticket was totally worth the show and the three-course meals. The cast was successful and brave to try a new form of theater that is very creative and innovative.

The storyline of “Her Lips Are Sealed” begins at the Ristorante Venezia which had a neon sign posted above the cafeteria door. Producer Ives Gottsbucks, announces his new production, accompanied by Sheesha Ragsworthy, the costume designer, Jean Astaire, the choreographer, and Hedda Parseword, the leading actress. The news was celebrated with Misty Shore, an actress-to-be, and her boyfriend Pretty Boy Barnes, Barnes’s sidekick, Jimmy the Weasel, reporters Guillermo Boca Grande and Rhoda “Rhoddy” Hunter, and Shore’s rival, Helena Hazbendare and her love, Samson Goodfellow.

The night is ruined with the shocking death of Parseword who was played by Ms. Wendy Sarnoff. Lt. Sam Spaed, played by an amazing Omar Cruz, was called to investigate the murder. Spaed believes everyone in the restaurant is a suspect and no one is allowed to leave.

The big question is who murdered Hedda Parseword? Was it Sterling Snootmeister, the outrageous maitre’d played by Xekias Haynes, who turned out to be her illegitimate son? Or the restaurant servers, Chi-Chi, Dylan and Sherman also known as Melina Torres, Darlene Silva and Ernesto Ornelas? Could it be Boca Grande and Hunter, Alejandro Sanchez and Brittney Amorsolo the reporters looking for a story? Or could it be the producer himself, Gottsbucks played by Phillip Moraga? Maybe it was the producer’s friend, Fernando De Las Vegas, also known as Andrew Torres? Was it the choreographer (Theresa Taulaki) and the costume designer (Lauren Nelsen)? Could it be Shore, who wanted the part, with the help of Barnes and Jimmy? Or was it loving man, Goodfellow played by Angel Guerrero and his love, Hazbendare played by Tatiana Bermudez?

It was very entertaining to see the entire cast interact with the audience before and during the show. Especially having Spaed asking the audience to help him solve the case and asking who they think is they murderer while he took notes. Boca Grande and Hunter also asked the “lower class”- – the audience – – who they thought was the murderer.

The dinner show food was surprisingly delicious. The first course was a small serving of Caesar salad. The entrée could be Fettuccini Alfredo with vegetables, Salmon with Mango Chutney, Chicken Cordon Bleu or Chicken Marsala. All were served with a side of cheddar smashed potatoes and green beans, also with water or apple cider as refreshments. The only problem with the Chicken Cordon Bleu was the chicken was dry, but still good to eat. The third serving was small piece of delicious chocolate or vanilla cake. Overall the food was delicious and the three-course meal satisfied my hunger.