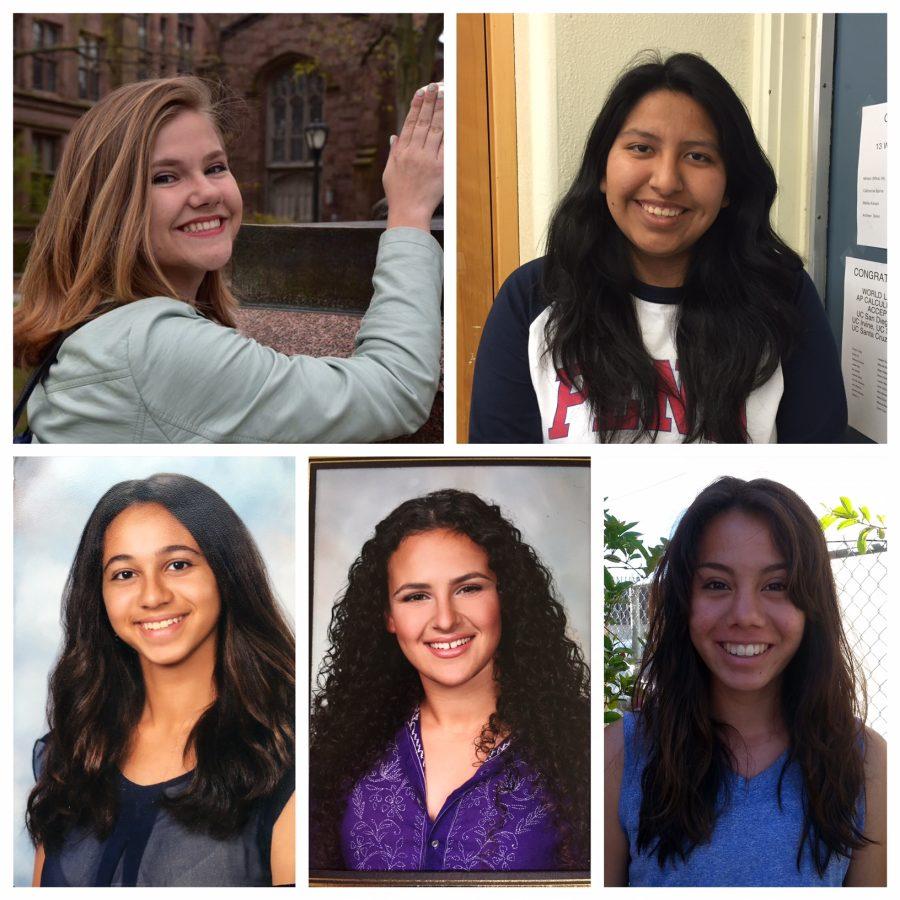 For the past month, seniors have been receiving acceptance letters with the good news. These five students have all been accepted into exemplary colleges.

Miranda Rector
Miranda Rector is planning to attend Yale University. She also applied and was accepted to UC Berkeley, UC San Diego, and Yale-NUS, a partner start-up between Yale University and the National University of Singapore. She is deciding to major in biomedical engineering or molecular, cellular, and developmental biology.

Rector’s accomplishments include being the founder and president of the Venice chapter of the Junior State of America organization, the co-founder and co-president of The Net Project, captain of the Science Bowl and Robotics team, and going to a volunteer trip in Nepal during the summer.

“I picked Yale because it has the spirit of both a research university and a liberal arts college,” said Rector. “As someone who likes politics, science, and creative writing, I wanted to pick a college that would not limit me in the pursuits of any of these three.”

Rector received a $10,000 annual scholarship from the Dr. Bart Kamen Memorial FIRST Robotics Scholarship. She flew out to St. Louis last week to receive the scholarship after visiting Yale and had the opportunity to meet Dean Kamen, the founder of FIRST Robotics and the inventor of the insulin pump.

Aly is planning to major in neuroscience and is planning to go to a premed route, which she sees as an opportunity to give back and help others as a doctor. She has been involved in Heal the Bay, Help for the Handi as president, Robotics, Students Run LA, Knights and Ladies, Chatelaines and Esquires and the swim team.

Iris Jacobs
Iris Jacobs was accepted into University of Chicago, as well as Cornell University and four UCs. She put down anthropology as her major, but is still considering other majors. She is swim and dive team captain and is involved in Interact Club, Heal the Bay, Chatelaines and Esquires and Knights and Ladies. She was also a member of the Los Angeles Mayor’s Youth Council for two years.

Jacobs is planning on attending University of Chicago, where she wants to continue swimming on the swim team. Jacobs said that since it was a Division III sport, it was a good program for her.

“I visited and it seemed like a pretty good school,” said Jacobs. “I appreciated that it was in the Midwest, which is more out of my comfort zone.”

Jocelyn Morales
Jocelyn Morales was accepted into USC, Claremont McKenna College, UCLA, UC San Diego, and UC Davis. She is a cross country and track captain, and was involved in Relay For Life, Magnet Ambassadors, Heal the Bay, Chatelaines and Esquires and Knights and Ladies.

Morales has committed to USC and is majoring in psychology. She has received a scholarship from USC and would have to pay only $5,000.

“I like the interdisciplinary program,” said Morales. “I like the environment. It has really good school spirit and great people.” She also liked USC because it was close to home and it offers a forensic science minor, which she is leaning towards as well.

Morales also considered Claremont McKenna (CMC) to make sure she had different options to choose from. She said that CMC, which is a liberal arts college, has a good legal psychology program.

Wendy Arce
Wendy Arce was accepted into Brown University, University of Pennsylvania, Bowdoin College, UC Berkeley and UCLA. Arce is attending UPenn in the fall, and she is planning to major in mathematics with a concentration in computer science.

“I don’t like words,” said Arce. “English was not my first language, so I always felt behind everyone else.” However, she took a liking to math.

Arce took a course over the past winter with South Central Scholars and learned the basic fundamentals of Java software. Though it was difficult, Arce found it very rewarding.

“Many things are dependent on coding and we need to keep up,” said Arce.

For University of Pennsylvania, Arce got a full ride and needs to pay only $60 for the deposit.

“The way she talked about the school, she showed enthusiasm and genuine love for the school,” said Arce.

Arce also added that University of Pennsylvania has a very prestigious business school and engineering program.

She was cross country and track captain for three years, and was involved in Heal the Bay, Tolerance Club, Relay For Life, and Chatelaines and Esquires. She was also a Museum of Tolerance docent, One Voice Scholar, and South Central Scholar.