New Skateboard Lockers Available For Use 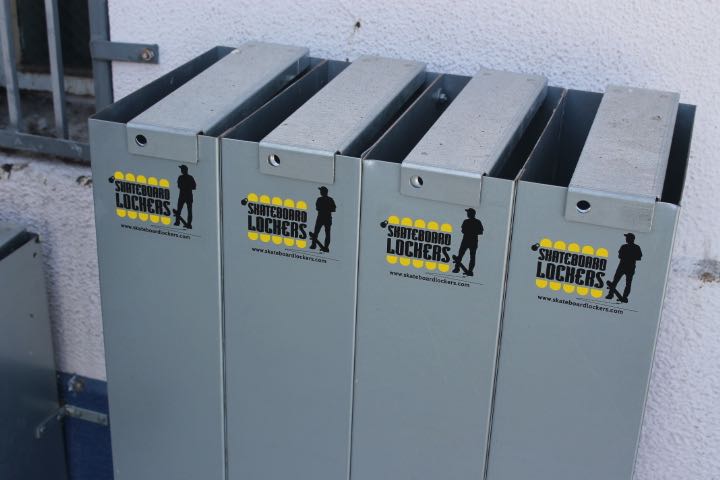 The new skateboard lockers were put up to give students a safe place to keep their boards. They are located outside the West Building facing the Main Office.

Because a lot of students use their boards to get to and from school, Venice High officials decided lockers were a good idea. Dr. Oryla Wiedoeft thought it was time to give consideration to the skateboarders just like they did for the bikers when they got bike racks. Like the bike racks, students need to purchase their own padlock to secure their boards.

The lockers aren’t the only plan that Venice High School’s principal has in mind for skaters.

“I really would like to see us have skateboarding as a P.E class and after school program,” said Dr. Wiedoeft, “There is also an Interscholastic Skateboarding League which I think we can get a team together to compete in.”

Skateboarding has a place in Venice and impacts the students and school. Because of Sara Roos, parent of a former Venice student, the lockers are now a reality. She was able to get a Mar Vista Community Grant to provide the school with money in order to take this next step.

These lockers could benefit students by letting them have a big enough place to store their boards. A lot of students have problems fitting their boards in their book lockers and end up carrying them around school, which is against the school rules. Now with these outside spots, even long boards can fit inside and they wouldn’t be violating the school policies.

“ I believe these lockers can be useful to some of the students on campus because now they don’t have to go through the hassle of carrying them throughout the school day,” said Johnnie Denney, eleventh grade student and skater at Venice High School.

At least seven students said they see the lockers as a waste of space. Some kids are afraid of their boards being ruined or stolen if they are stored in the skateboard lockers. The students also said they would feel better if they held their boards through out the day or had a teacher hold them until the end of school because they know they are not out in the open and the student or teacher has an eye on them. Others with small boards such as penny boards said they can store them in their locker without any problem and don’t need to use the new lockers. People may complain about the fact that they need to purchase their own padlock. A lot of students have also noticed that the lockers are being used as trashcans and there are bird feces on the lockers that they do not want on them or their boards.