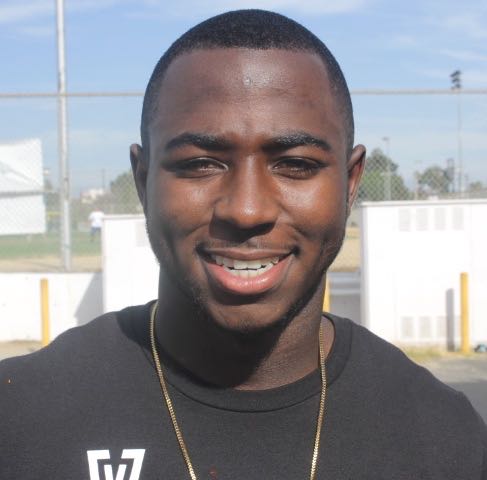 If you attend Venice High varsity football games, then “ Number Five on the 15-yard carry on the first down” is something you have heard before. Number Five is junior Justin Cauley, a varsity running back on the football team. Cauley made his mark this season by improving his speed and as one of the team captains.

According to Cauley, the recognition of his flaws in terms of playing and his improvement of his physical health helped him immensely with improving his playing this season.

“ Last year I wasn’t as coachable in the game as I am this year,” said Cauley,” I was also really out of shape. I did not take the off-season as seriously as I did this past off-season in regards to fitness. Last season I was very slow. I contributed to the games somewhat, but it wasn’t until the last game of the 2015-2016 season against Arleta High that I finally felt comfortable with the speed of varsity because of the fact that I came up from junior varsity one year prior.”

Coach Angelo Gasca, explained the significant change in Cauley’s playing from a coach’s point of view

“The biggest change in J.C. is his confidence.” said Coach Gasca.” Being on varsity as a tenth grader was an adjustment for him. I think at the end of last year, he started to play really well. This year we moved him from receiver to running back and its just been an incredible improvement. A lot of which stemmed from how hard he worked in the off-season.”

As one of the team captains, Cauley said he helps to lead football team in the best direction.

“I like being the one to lead my team out to war. he said Having that confidence that everyone is following you and you’re doing the right thing is what I like the most.” he said

Cauley has made his mark by gaining over 1,300 yards in five games. Compared to the average running back in his age bracket (900), Cauley is making great strides towards a future as a professional football player.

“ J.C. is one of the most explosive players that Venice has had in the last five years.” said Venice High football announcer Robert Mascarenas. ”His size and speed at such a young age gives him a big advantage at eventually becoming best in the league.”

Venice High School upholds the standard that sports players are students first and athletes second. This standard is very important to Cauley, so he has taken his academic career seriously throughout his time here at Venice by keeping a grade point average of 3.1 and above.

“Grades are very important to me and my mom,” said Cauley, “I know and accept that if my grades aren’t good, there is no football after high school, so I try to stay on top of my grades.”

“ You have to learn to be competitive in the classroom and be positive about that type of competitiveness.” said Coach Gasca. ”J.C. made a conscious decision to be a better student. Then he set about doing the work that is required of him. I think he did the same as a person. He made better decisions in his personal life as well and I think that’s helped him tremendously.”

Cauley is an example of how self-belief, perseverance, and hard work can help you accomplish your goals.

“I think he has grown up a lot and matured as a person and student.” said Coach Gasca. “He makes much better decisions about his life. This carries over to the field and all of us can learn from that. For J.C., getting in a position where he can help the team more as a running back gave him opportunities to do better. I am not surprised by his success because he worked hard and he’s earned it. So I am proud of him. It’s a example to the rest of the team that through their hard work they can accomplish their goals. The best still to come from J.C.”

Cauley credits his mother for his success in his academic and sports success.

“I just want to say that I love you with all my heart, Mom. Through all of the problems that I have and the things that I went through, I remember our favorite words: perseverance, drive, and dedication. Those are the words that I live by.”