Down Goes the Tower of Terror 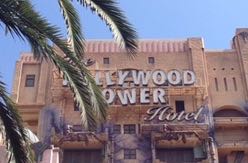 Andrea went to go and enjoy the Tower of Terror one last time before it's gone.

Chances are you’ve heard of the Twilight Zone Tower of Terror, a themed free fall ride at Disney’s California Adventure Park in Anaheim. You love it right? It’s one of your favorites? Well, it will no longer be there after Jan. 3. This is one of Disney’s best and should not be taken down.

I first heard this a few months back from a friend and began to laugh. I thought it was a bad joke, since they would be taking down California Adventure’s most popular attraction. It wasn’t until I discovered that it was being replaced by a ride themed around the “Guardians of the Galaxy: Mission Breakout!” that I realized that this was real and that Disney was cashing in on a current trend.

The first appearance of the Tower of Terror was at Disney’s Hollywood Studios Park in Walt Disney World in Orlando, Florida and, over the years, the attraction has been added to the Tokyo Disney Resort in Japan and Disneyland Paris Resort in France as well as the Disneyland Resort in Anaheim, California. However, there are no intentions to take down the attraction at any of those locations besides Anaheim.

Disney needs to realize that nothing can beat the Tower of Terror, a haunted elevator ride inspired by the Twilight Zone TV series. Usually free fall rides lack a solid theme and are all replicas of each other where the only element that varies is the height of the ride. However, in this case, the theme makes this ride unforgettable, as it is unique. Everything you see while waiting in line is Twilight Zone themed, and there are numerous elevators with bellboys that welcome you in while an impersonator replicates Rod Sterling’s introductions from the original episodes, and before you know it, you’re headed up.

“Guardians of the Galaxy”, a superhero film based on the Marvel Comics superhero team of the same name, was a box office in 2014. I loved the film and still do. I’m pretty sure that most of America loved it based on its critical acclaim and box office performance. So, of course, a sequel is coming just in time for the new attraction to open in May 2017. Disney wanted to earn even more money by opening a new attraction based on a popular franchise. In the end, what does “Guardians of the Galaxy” even have to do with California? With the Tower of Terror gone, California Adventure is slowly losing its classic identity and selling out in the scariest way possible.

The closing of the attraction will not be received well by many people. It would be a different story if it was being renovated but it isn’t: its days are apparently done. However, in preparation for the closure, Disney began a “farewell” promotion of the ride on Sept. 9, which feature a “Late Check Out” option to experience the drop portion of the ride in total darkness. It will be available until Jan. 3, closing day.