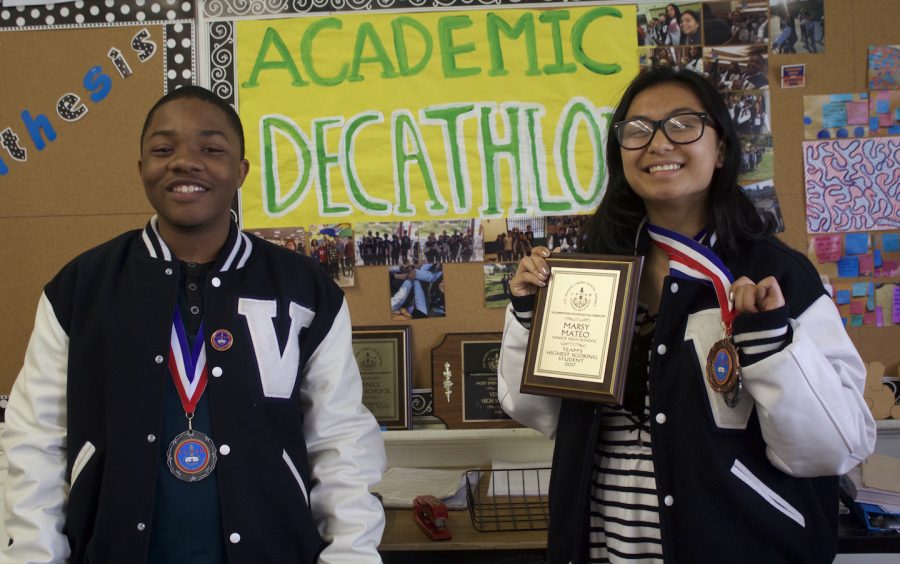 The Academic Decathlon team participated in two competitions on the weekends of Jan. 28 and Feb. 4 at the Roybal Learning Center, where they won several awards. Three out of the eight members who participated in the competitions from Venice High School won an award. Next year’s team is currently being formed.

The January competition, that included 63 schools, was based on speech, essay, and interview, where the team won the most medals. Marsy Mateo, the president of the Academic Decathlon team, won two medals, silver on interview and bronze on speech. She was also awarded for best scoring member. She scored 986.7 (all categories are scored out of 1,000) on speech and 906.7 on interview.

“I put a lot of effort into the competition, said Mateo. ”I studied two hours in a weekday and about three hours on the weekends. It took a lot of dedication studying, messaging every member on the team, and setting up meetings with everyone’s busy schedule.”

The other award-winner is junior Joshua Fenty, who was awarded a silver medal, receiving 973.3 on interview.

Senior Edwin Martinez, on the other hand, got a score of 920 on essay, receiving a certificate.

“It was my second time at the competition and it was just as great as last time,” Martinez said. “It was nerve-racking, of course, but after everything was said and done, it felt like a weight was lifted off my chest. I, along with the rest of our team, spent hours after school studying and perfecting our speeches.”

The February competition consisted of seven objective tests: art, music, science, social science, economics, music, and literature that all correlate to one central theme. The theme for this last season was World War II. Next season’s theme will be on Africa.

The team is welcoming new members for their next season. There will be another recruitment meeting next month. Students are able to join whenever, but joining sooner gives them a better chance to get on the team. Students can email the current president at [email protected] or the co-presidents, Pedro Celis or Joshua Fenty, at [email protected] Also, if interested, students can go to Ms. Lisowski’s room, which is room 108 in the east building.