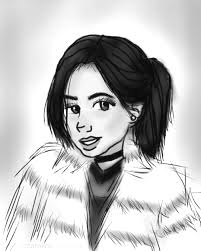 Since pop singer Camila Cabello’s exit from the breakout group Fifth Harmony, she has been busy working on her own music and being on the cover of “Seventeen” and “Billboard” magazine.

Cabello’s new music will be about expressing herself personally.

“Fifth Harmony wasn’t the maximum expression of me individually,” she said in her “Seventeen” interview. “My fans are really going to get to know me from the music I’m writing. My goal is to be brave and open up my soul.”

Cabello has also teamed up with Latin rapper Pitbull and J Balvin for the track “Hey Ma” to be featured on the new soundtrack for the upcoming film “The Fate and the Furious,” which was filmed in Cuba where Cabello was born. Camila later tweeted “Para mi gente Latina, stand up!” which means “for all my Latin people, stand up” in English.

Cabello dreams to be a huge inspiration to the Latino culture. “Where you come from doesn’t define what you’re going to do,” Cabello tweeted early February. “I grew up in a Third World country, and I’ve come this far, I want everyone regardless of where they come from to follow their dreams.”

Cabello’s album will be released in late 2017, according to Entertainment Weekly.