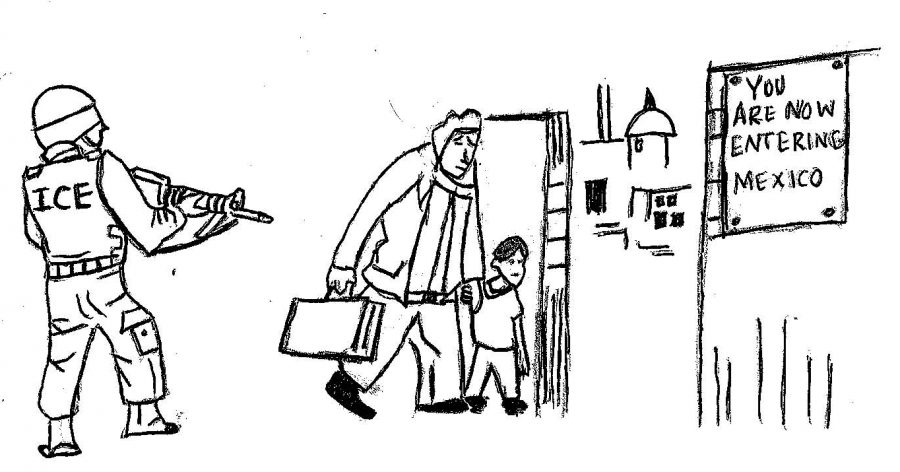 Having undocumented parents, I can’t imagine what it would be like for my younger sisters and me if one day my parents don’t come back from work because they have been detained and will be ordered for deportation. The thought of my parents getting deported is agonizing and terrifying. It’s even more terrifying because it can happen at any moment.

In Los Angeles, a father was driving his daughter to school when they got stopped by ICE and his family had to watch him get detained, according to Ted Chen from NBC Los Angeles. I can’t imagine how much my life would change if I got separated from my family.

The Trump administration has created a fear amongst many people who are undocumented, especially in the Latino community. Immigration has been an ongoing issue and a key agenda with the new president, Donald Trump. There is a greater fear as he set out a hate platform all throughout his campaign and has continuously attacked many groups. He has targeted immigrants, in particular, the immigrants who have crossed the United States southern border and “taken jobs.”

ICE, Immigration and Customs Enforcement, is a government agency that is suppose to provide safety and security in our country and instead focuses primarily on the removal of immigrants who came here illegally and those investigated by Homeland Security.

In the past month, ICE has arrested over 680 undocumented immigrants and the numbers just keep growing, according to Stephen Dinan from the Washington Times. Dinan also mentions that advocates say ICE raids are not only targeting criminals but also non-criminals who were protected by the Obama administration.

“I feel that Trump’s immigration plans are very demeaning,” said senior Francisco Medina. “I feel that ICE is just doing their job but it really affects us because we are afraid of being deported and we came here to have better lives and a better job. I feel that some criminals are immigrants and I get why they are trying to deport the criminals, but from what I’ve seen on the news they’ve been detaining criminals but some of these people haven’t committed a big crime.”

It has created worry not only for undocumented students and workers who are at risk of deportation but those with undocumented family members.

ICE has created a fear in my own family. My parents have committed no crime in America and have been here for over 20 years and want nothing else but work for a better life. My parents sacrificed so much to give me a better life. My family didn’t come to America to sell drugs and become criminals. Now with Trump’s new immigration policies, not only has my family been worried and others like mine but young undocumented students since they can also be easily detained and deported and have their American dream crushed.

Recently ICE has deported Guadalupe Garcia de Rayos, who had been charged with false papers after a raid and had been reporting to ICE since, but when she went to report to ICE after Trump’s regime, she was detained and then deported, according to Chris Sommerfeldt from New York Daily News. This sparked fear to many of those with undocumented family members because Trump had repeatedly said he was only going to deport criminals but with Rayos deportation, it showed immigrants in the same situation weren’t safe.

It is important that if you are at risk of getting deported because of your status or know any of your family members are at risk of deportation, you have rights under the Constitution, regardless of your immigration status.

It is important to know your rights if detained by ICE. The Fifth Amendment under the U.S Constitution will protect your right to refuse to answer to any questions asked and the signing or handing of any documents to you. There are more resources on what your rights are if ICE detains you on chirla.org.

Those who have this hatred towards immigrants and want them all deported don’t understand that by supporting the deportation of immigrants, they are supporting the separation of families and supporting future deaths of people who have run away from dangerous countries. They are also ruining the American dream for the families who came here for a better life and discrediting the concept of the melting pot.

I don’t understand how many of these people supporting deportations for all immigrants can bare the thought of leaving children without parents or guardians or taking away opportunities for those who come here for a better life and to get an education and better our country.

America is a country made up of immigrants. The true people of America are the Native Americans. They are the only people whose families and ancestors have been here before the word “illegal immigrants” existed. All these people who believe they are “true” Americans and have the right to be here, and believe all immigrants should be deported need to take a seat and open a history book. They need to look into their history and see where their ancestors came from; including our president whose mother was an immigrant from Scotland.

If you fit into the situation of being at risk of getting deported or a family member getting deported, prepare for a plan by consulting with an immigration attorney about your situation and have the attorney’s number visible in your house for anyone to reach.
If ICE comes to your door, do not open the door. ICE cannot come in without a signed warrant by a criminal court judge. They can only come in if you let them.
Remain silent and plead the Fifth Amendment and choose to remain silent. Do not sign anything without an attorney present.
Report and record of the raid, you can call the UWD, United We Dream hotline (844) 363-1432.
Get a trustworthy attorney and fight the case, for more information go to unitedwedream.org/end.

For additional information, you can pick up flyers on your rights and resources in the Magnet Office, upstairs in the Main Building, from the A-G Diploma Program PSA counselor Gildrado Rodriguez.