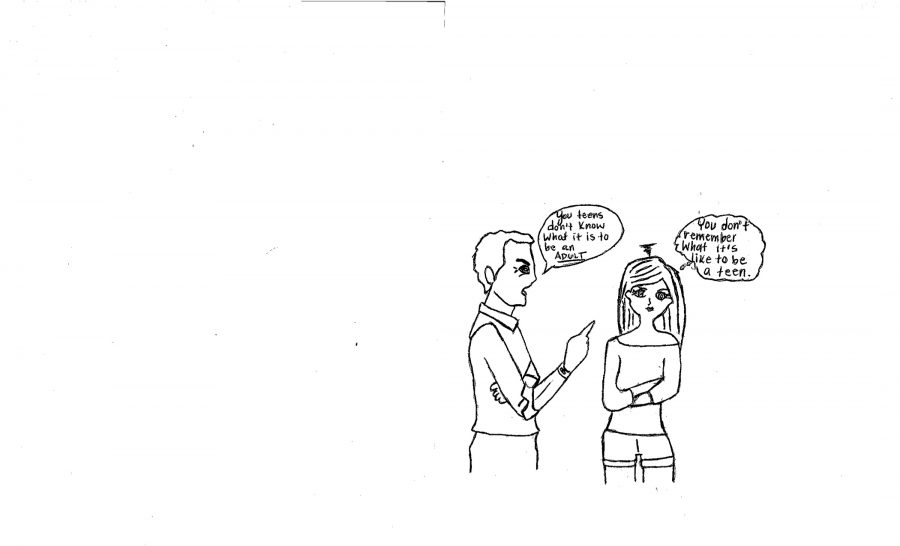 A lot of the time, we teens can’t wait to be fully grown so that we can finally leave high school behind and live life by our own rules. We’re not kids, but we certainly aren’t full-fledged adults either; we’re sort of awkwardly placed between childhood and adulthood. We like to be able to make our own decisions, and we expect our elders to be on board with said decisions, or at the very least respect our decisions. This is often not the case, as adults believe that they always know what is best because they have more life experience.

For the teen that feels unheard, and the adult who does not hold stock in a teen’s ability to be aware and make decisions, a lot of tension can arise between them. This tension strains relationships, causes teens to resent authority figures, and causes adults to greatly mistrust the intentions of young people.

Junior Adamarys Abad described a scenario in which her father refused to listen to what she had to say upon finding out that she received a poor grade. “He doesn’t know what I go through,” said Abad. “School is not the way it used to be.”

It’s often hard for teens to define how we’re expected to act when adults refer to us as young adults, but treat us as if we’re small children. Adults want teens to make good, mature decisions, while refusing to give teens the space and freedom to do so. We want adults to listen to what we have to say. It’s very important to feel acknowledged and listened to. It makes us feel like the mature young adults that we are expected to be.

Though, I can see why it is, adults often don’t trust teens. After all, we don’t always make the best choices due to our youth and general naivety. What we teens have to recognize is that adults are not attempting to stop us from making our own decisions. The truth is that adults are afraid that we will make an awful decision and regret that decision in some way shape or form.

Regret is not a pleasant thing to have to live with, and adults want to shield us from that as much as possible.

Adults should trust teens more when it comes to knowing what they’re talking about, and making sound decisions despite their fear. Doing that would encourage more teens to trust authority and really live up to the title of young adult. The beauty of such a relationship is that when and if we do mess up, we will be more encouraged to work it out with an adult who will probably know what to do to turn the negativity around.

As much as we hate to admit it, we will need adults to step in from time to time and make decisions that are ultimately for our own good, or at least to heavily guide our decision-making process.

Not all adults have trouble putting their trust in young people. It is those adults that teens hold to the highest esteem and trust the most.

Adults, try to trust that we know what we’re doing. We know most of what we know because of you, after all. Teens, don’t be completely against the idea of adult intervention. Adults are full of pretty great advice, and it wouldn’t hurt to take advantage of that from time to time.