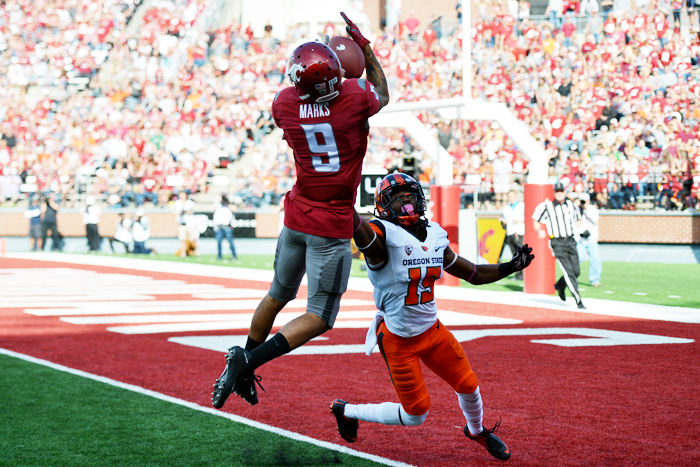 Gabe Marks is a former Gondolier currently attending Washington State, where he plays wide receiver. He hopes soon to be drafted to the NFL.

At Washington State, Marks set the Pac-12 record for most career receptions in his senior year, according to NFL.com. He  also finished second in conference history with 37 touchdown catches and seventh with 3,453 receiving yards. He is not necessarily the biggest receiver at six feet, 190 pounds, but NFL.com reports he may be the hardest-working.

Marks was recently spotted on campus while visiting his old football coach, Coach Angelo Gasca. Marks was asked how it feels like to be on the threshold of being on the NFL. His response was, “It feels like a Christmas present you can’t open yet.” The NFL draft will start April 27.

Marks had a successful high school career, according to wsucougars.com. He had 53 tackles as a sophomore and was named MVP of Los Angeles Nike Football Training camp as a junior. As a senior, Gabe was named the Western League’s defensive player of the year.

“He didn’t come in as the best, but earlier in the spring of his freshman year, I knew that he was going to be the best person in his class,” said Coach Gasca.