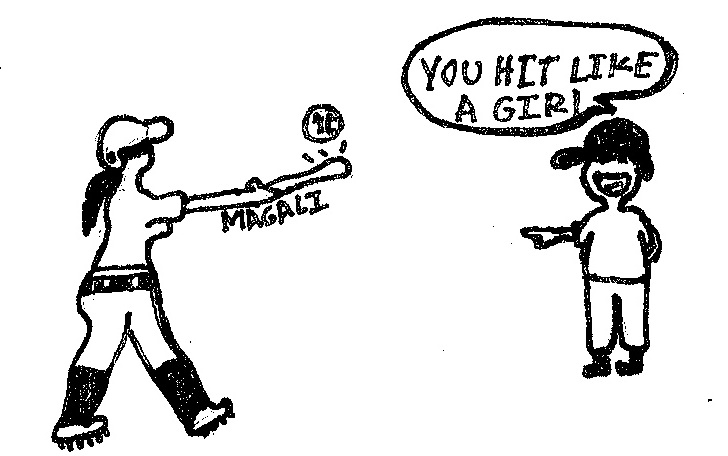 Ever since I was a little girl, I remember being told that I “run like a girl” and that I do “girl push ups.” I know that the people who said this to me didn’t have malicious intentions, but what they didn’t realize was that saying such things actually had an effect on me. They made me feel as if I, and other girls too, are unable to do these things solely because of our gender.

These remarks have extremely negative connotations. People who make such comments make it seem as if all girls are weak and incapable of running fast, doing a proper push up or any other activity that would usually be perceived as “manly.”

Another remark I’ve gotten for as long as I can remember is “you’re a lady, you shouldn’t [insert unladylike action].” Unladylike things being: sitting with your legs open, burping, and other things men do all the time but don’t get shit for. Men do these things all the time and it’s absolutely okay, but god forbid a woman ever does such a thing. It’s time to put an end to such ridiculous double standards.

Sexist remarks aren’t just rudely thrown around to women, but to men too. Men are taught to be tough and manly at a very young age. They’re taught to not show any emotion, especially if that emotion is sadness. They’re taught not to cry because “men don’t cry.” Growing up like this can be very toxic. If and when a man does let out a few tears, some people may see it as “feminine” or even “gay.” But letting out your emotions and crying is completely natural and even vital every once in awhile. Keeping everything bottled up can lead to bad mental health issues like depression.

These terrible remarks must end or should even be turned into something positive, like the company Always has been doing for the past few years.

Always, a feminine product brand, launched a campaign called “Like A Girl” in the summer of 2014. This campaign is an attempt to give “like a girl” a positive connotation.

“Sports are critical in building confidence,” according to Always’ website.

A recent study found that women of the age of 18-24 are twice as likely to be confident if they play sports regularly than those who don’t play a sport at all. “And yet, society is not tackling the silent issue of girls dropping out of sports,” states Always.

Always has a series of “Like A Girl” videos on their Youtube channel. In one of the videos, they have teenage girls and young girls. They ask all the girls to “run like a girl” and “fight like a girl.” The older girls run and hit weakly, whereas the younger girls run and hit as strong as they can. This “Like A Girl” video even aired as a commercial during the 2015 Super Bowl! “The ad may be the first time a feminine care product was advertised during the Super Bowl,” says Jillian Berman for huffpost.com.

Always is inviting everyone to join the campaign to rewrite the rules and keep girls in sports. You can participate in Always’ campaign by using #LikeAGirl on social media.

The Always campaign is raising a lot of awareness and is a huge step forward. It’s of huge benefit to putting an end to the “like a girl” remark but I hope that soon all sexist remarks come to an end. Who knows, Axe or Old Spice may even do a “Like A Man” campaign in the near future where they talk about their feelings and bake cookies.