Read your Horrorscope, watch a scary movie or find out what teens' favorite candy is. 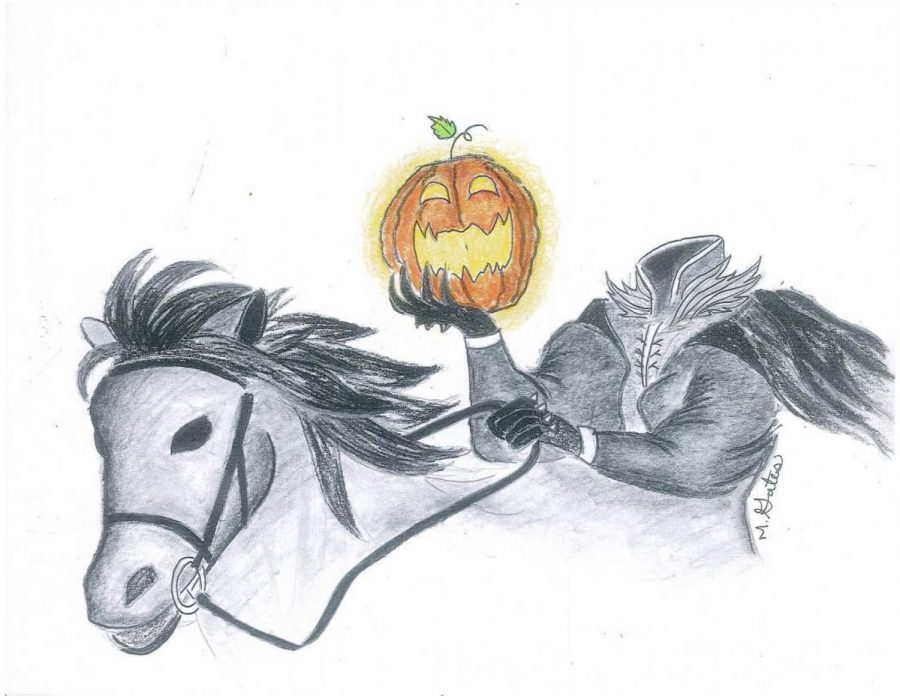 Aquarius (Jan. 20-Feb. 18)
This Halloween expect to find the pumpkin to your pumpkin patch. Don’t be too reluctant to meet new people because one of them may very well be the one that you’ve been looking for.

Pisces (Feb. 19-March 20)
You may feel a little ghostly this month, so be sure to ride an elevator to lift your spirits. You’ll find comfort in speaking to your ghoul friends, you can trust them with your life. They’ll be your ride or die.

Aries (March 21-April 19)
Be aware of your surroundings, there may be someone watching you. However, if you see a bird, you’ll be getting some sweet tweets this Halloween! This month is yours to take. Eat all the candy until you drop dead!

Taurus (April 20-May 20)
Serenity is on your horizon this month, Taurus. You’ll be just like a skeleton: nothing will get under your skin! Keep calm and continue to have a blast like always!

Gemini (May 21-June 20)
You’re very likely to discover new talents you didn’t know you had. Be sure to embrace your multiple personalities and use them to your advantage. Don’t get into any heated arguments or on anyone’s bad side. It will not end well for you.

Cancer (June 21-July 22)
Your luck is through the roof this month! You may be subject to finding love or money this Halloween, so be sure to keep your eyes peeled for that lucky black cat… or that $100 bill!

Leo (July 23-Aug. 22)
You’re on fire!! Be sure to show your inner lion or lioness this month. Your confidence is key to how you present yourself to others. Don’t be so hard on yourself or you’ll dig your own grave.

Virgo (Aug. 23-Sept. 22)
Your presence is much needed this month. You sure know how make people’s day more enticing. Your talent for calming people down is extraordinary so they don’t lose their heads!

Libra (Sept. 23-Oct. 22)
Lately, you’ve been searching for someone to depend on. Well guess what, the search is over! Some lucky vampire will ask you to go to homecoming with them. Step out of your comfort zone and rattle your bones!

Scorpio (Oct. 23-Nov. 21)
Uh oh! Looks like your month is filled with bad mumbo jumbo. Perhaps you may want to consult your local witch in regards to a protection spell to keep you out of harm’s way. But beware, witches can give stitches!

Sagittarius (Nov. 21-Dec. 22)
Your love for food and animals has not gone unnoticed, but for the love of the Headless Horseman, don’t feed the wolves this Halloween. They will hound you for your life (and the rest of your food!)

Capricorn (Dec. 23-Jan. 19)
The stars are aligned, so that means you’re in for a stress-free week. But don’t rock the boat too much, this may lead to unhappiness. Just relax, finish all of your assignments for class on time so you’re not behind and make friends, not enemies. Be social!

Halloween is coming soon and here are some of the most iconic movies to watch during the spooky season.

1. “Halloween” (1978)
This movie shows Michael Myers as a kid being bullied by other kids at school and taking his rage out on animals. He kills two of his family members with blood and guts galore and is sent to jail. He is then sentenced for 15 years. Later he escapes, surprising viewers as he goes back into town to find his next victims.

2. “Beetlejuice” (1989)
Recently married, Barbara and Adam Maitland die in a car accident and their ghosts end up back at their house, unable to leave. Soon after their deaths, a new family, the Deetzes, move into their home. The Maitlands are upset that this new family has moved into their home and try funny but failing escape attempts. Adam and Barbara decide to hire Beetlejuice, a bio-exorcist who will get rid of the Maitlands once and for all. This creepy and hilarious movie is a must watch.

4. “The Rocky Horror Picture Show” (1975)
Married couple Brad and Janet are stuck with a flat tire during a storm and discover the spooky mansion of Dr. Frank-N-Furter , a transvestite scientist. Brad and Janet meet a houseful of wild characters, including a rocking biker and a creepy butler. Through elaborate dances and rock songs, Frank-N-Furter unveils his latest creation: a muscular man named “Rocky”. A great way to watch this movie would be at midnight in a theater with some friends.

5. “The Addams Family” (1991)
When a man claiming to be Fester Addams, the missing brother of Gomez Addams, arrives at the Addams household, the family is very thrilled and excited to see him. Morticia begins to suspect that he is not the real Fester when he doesn’t remember details of Fester’s life. With the help of a lawyer, Fester tries to get the family kicked out of their house so he can keep it. A lot of drama and comedy make this movie unlike any other.

6. “Scream” (1996)
Although there is a series of four movies to the Scream franchise, the original “Scream” is a Halloween classic. The ghostface killer that reappears in the other movies makes his first appearance in this movie. The murderer kills teenagers in a small town and a group of friends set out to find the killer but not everyone makes it out alive. The surprising revelation of the killer is mind blowing.

7. “The Craft” (1996)
A new girl in a Catholic high school makes friends with a group of three teenage girls who practice witchcraft. They curse other people that upset them in the slightest way possible with their witchcraft abilities. The girls turn on one of their own which leads to many exciting suspenseful moments.

8. “Halloweentown” (1998)
This one of a kind Disney film is about three siblings that are not allowed to celebrate Halloween. They discover that their grandmother is a witch from a town called Halloweentown. The three siblings also find out that they are actually witches and they follow many adventures as they help save a town from supernatural creatures.

9. “Child’s Play” (1988)
This 1988 story kept us up at night when we were children, and every time we saw a shadow down the hall, that meant, that Chucky was there, ready to attack. “Child’s Play” is a one of a kind horror film to watch during the Halloween season.

10. “A Nightmare on Elm Street” (1984)
Freddy Krueger comes to terrorize people in their dreams while manipulating their daily life. It is a compelling Halloween film to watch during this season.

Halloween is near and candy is what many students are out to get. Students want the best candy they can possibly find.
The Oarsman conducted a poll by asking 100 students “In your opinion, which is the best candy to hand out on Halloween?”
These were the top five options of all candy that is handed out: Kit Kat, Hershey’s, Sour Patches, Skittles, and Candy-Corn. The following are the results of the poll.

Kit Kat is the winner according to this poll. Of course everybody’s opinions are different, but hopefully these results can help you in deciding what candy to hand out this Halloween.