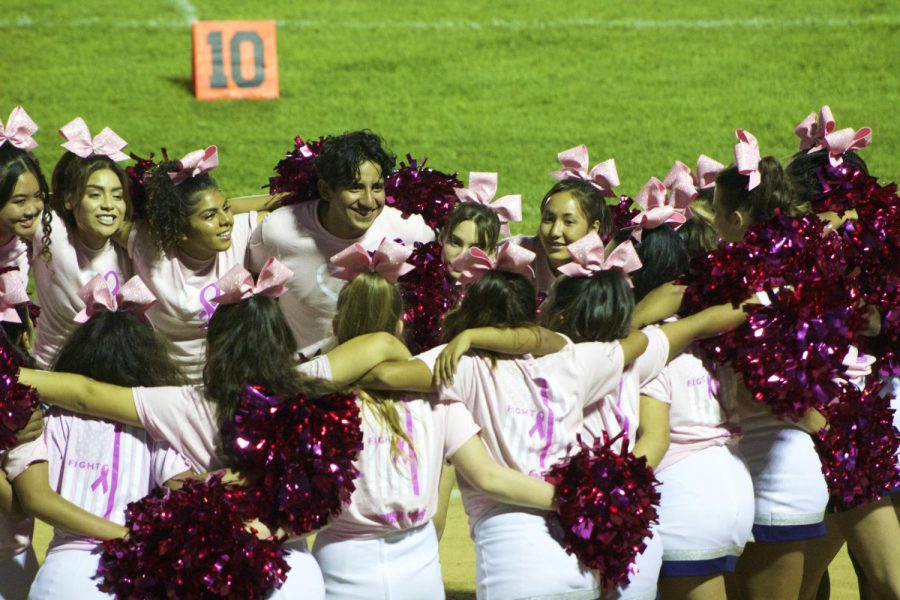 Cheer team in Pink Out gear at the varsity football game against Westchester.

For several years, Pink Out has been a tradition at Venice High School. During the month of October, various student organizations, clubs and sports come together to raise awareness and money for breast cancer research and medical care.

“Selling Pink Out clothing, Pink Out cupcakes, and encouraging the entire staff and student body to wear pink in the month of October are all part of this tradition” said Kirsten Farrell, Certified Athletic Trainer, in an email.

Pink out is especially prevalent at the home football games, where the cheerleaders, football players and marching band dress in pink to support the cause.

Other groups participating in Pink Out include Ms. April White’s students who are fundraising and raising awareness for all types of cancer in partnership with Stand Up to Cancer in an event called Crush Cancer. Also, ASB Leadership will be doing Kiss Cancer Goodbye, an event where they will sell Hershey’s kisses and raffle off a giant Hershey’s kiss at lunch on Monday, Wednesday and Friday during the first two weeks of October.

However, Pink Out is not just about raising awareness and money for cancer research.
“Pink Out is also about being united as a community,” said Farrell.

“It can also serve to unify the school based on knowing or having a family member who has or had cancer. This commonality allows the student body to stand together and it makes many realize that they’re not alone.”