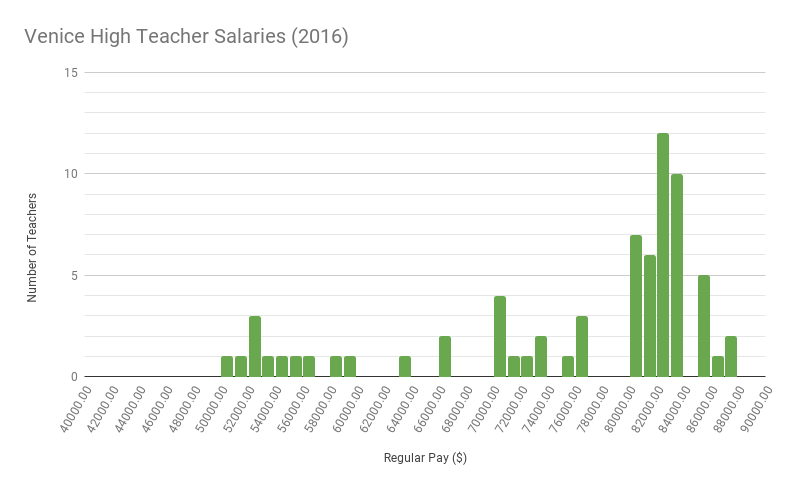 Many people believe that being a teacher requires minimal effort in comparison to other careers. However, teachers are those who not only prepare lesson plans and instruct students, but also manage the emotional and behavioral difficulties of students, differentiate for students with varying intellectual capacities, approach delicate situations such as those of disorderly conduct and develop and implement grade appropriate coursework to meet the academic needs of all students.

Financial income isn’t often the focus of becoming a teacher. Salaries aren’t the reason that encourages teachers to choose this specific career. Teachers disregard the idea of possibly becoming rich through such a career and rather have more of an altruistic motivation to help young people in a variety of ways.
“This is the profession I chose to go into because I like helping people,” said math teacher John Bruno. ”I didn’t go and become a teacher because of the pay. If I wanted a job because of the pay, I would’ve picked a different career to go into.” Mr. Bruno has worked in the LAUSD District for 27 years, making $80,994 as of 2016.

Most people are unaware of the process a teacher must endure to receive their teaching credentials. People often assume that it only takes a minimum of four to five years to eventually become a teacher. However, to move forward on the financial income scale, a teacher must earn salary points after becoming a teacher. Teachers continuously take classes although they’ve acquired the teaching position at a school to continue their education in order to move up on the salary scale and receive more salary points.
It takes a few years for teachers to take the required classes to get to the top of the salary scale. Meanwhile, teacher salaries often make it difficult for some teachers to make a living.

The average salary of a public school teacher in Los Angeles ranges between $53,633 to $70, 927, not including stipends and benefits, as well as other factors that impact their regular pay, according to Salary.com, a website dedicated to providing data on salaries in different industries. Teacher salaries and the salaries of all public employees, which are public information, can be found on the website Transparentcalifornia.com.

“In general, teachers are woefully underpaid, especially in Los Angeles compared to other surrounding schools,” said history teacher David Silberman who’s been working in LAUSD since 1984, making $86,884 as of 2016.

In San Francisco, homes for sale are within a price range that a teacher receiving median wages cannot reasonably afford. San Francisco’s cost of living ranks the highest among 821 districts in the state, placing it at No. 528 of the many districts that reported data to the Department of Education. During the last school year, the average pay for teachers working in the San Francisco Unified School District was $65,240, not including benefits, making it statistically known that 3,292 teachers earn less than those in other California public school districts. Typically, as teachers advance in their careers, they become more financially secure; however, for San Francisco’s teachers, their living situations are worsening as time progresses. To afford a one-bedroom apartment in the city, the average teacher would have to spend 69 percent of his or her salary on housing.

San Francisco Unified School District officials say that teacher pay levels are difficult to raise as a result of the district’s priorities, which includes spending excessive amounts of money on keeping classroom sizes small and California’s funding for education isn’t keeping up with that of other states.
“It’s hard to afford to buy a home and to make ends meet and live a comfortable life especially because salaries haven’t gone up as fast as they have in other places,” said Mr. Silberman.

Two factors that convince most teachers to go into the education career are the medical benefits and long summer vacations. Yet teachers will often work summer school jobs because they can’t afford not to.
“I have other jobs I took,¨ said Mr. Silberman. ¨I had six classes instead of five to earn extra money. Even now, I’m in charge of work experience because I get paid an extra eight hours per month for it.¨
As a result of insufficient pay, teachers can become creative and resort to desperate means to make a living. Some begin to drive for Uber or Lyft, start GoFundMe pages, or even work night jobs to pay their bills, according to an article on teacher pay on Sfchronicle.com.

As of 10 years ago, Mr. Bruno had been immediately rushed to the hospital in an ambulance, suffering a one-week coma, and receiving nine blood transfusions, CAT scans, MRIs and various medications. Once released from his dire two-week stay at the hospital, his total cost was only $50 as a result of the deductible for the ambulance ride.

While having comprehensive health insurance was beneficial for Mr. Bruno, the school district has been recently discussing a negotiation to decrease medical benefits for teachers.

“That’s a terrible thing. I don’t think it should happen. The last thing they should do is play around with benefits,” said Mr. Silberman. “LAUSD has excellent medical benefits for me and my family.¨

The medical benefits the LAUSD District provides to the teachers often support their families, as well as their significant others; however, as a result of this negotiation, teachers and their families may be drastically impacted, possibly even compromising their health.

“I think for the jobs that we do, we need to be rewarded for the service we do. It’s the same as policemen, firemen and people who perform a service,” said Mr. Bruno.