What is Color Guard? 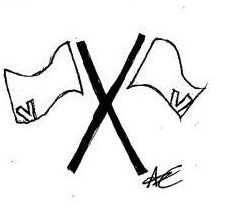 This year, color guard is a new program available for any boy or girl who would like to join. Mr. David Lee is in charge of this program and has meetings every Tuesday and Thursday after school in the band room.

Previously there were flag wavers that accompanied the marching band but that was done mainly to have a more traditional feeling, said Mr. Lee. This is the first time that there is an official instructor and it could potentially become a class in the future. Currently there are only three color guards, but Mr.Lee is hoping others will join in spring semester.

Color guards typically use flags, rifles, and sabres and some even include dance to make the accompanying marching band more entertaining. Color guards can be seen in many colleges, high schools, middle schools, and independent drum corps.

“This is a different way of performing that can’t be experienced in any other performing art in the school.” says Mr. Lee

Color guards usually perform along with the marching band during halftime at football games and also participate in marching band competitions.

The purpose of a color guard is to enhance the music being played by the marching band by adding color and synchronizing with flags and dancing. The costumes being blue with a gray stripe across the chest add Venice colors to the marching band.