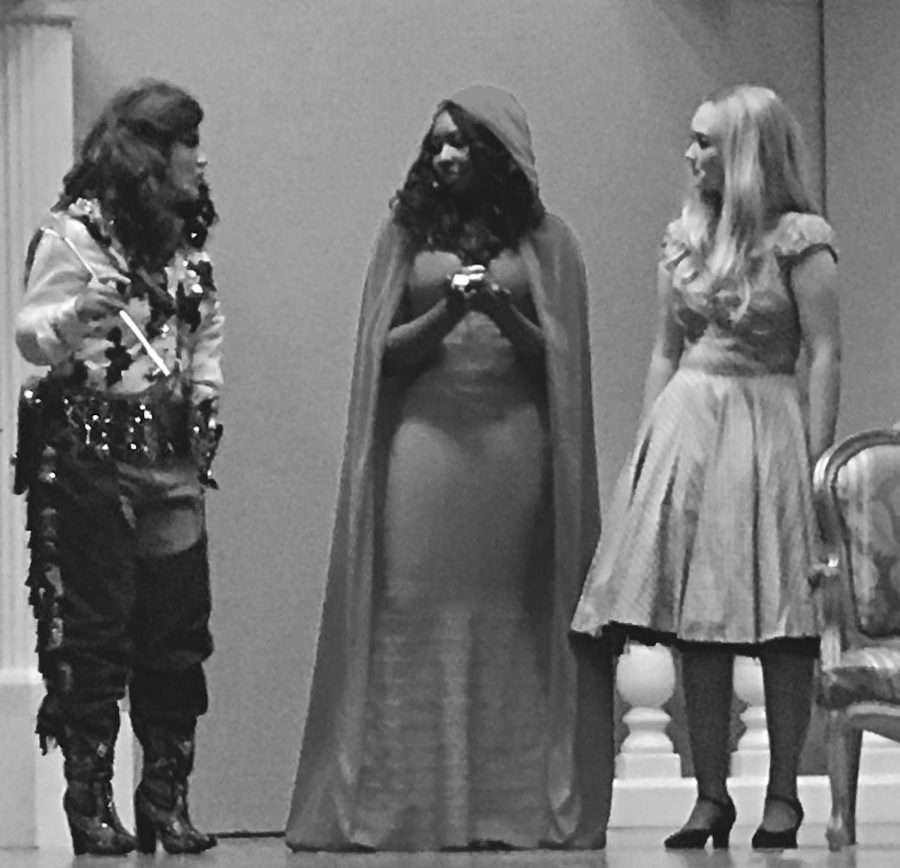 Kiana Iwata, Shara Wade and Tyler Stoner as Elba, Red Riding Hood and Goldie Locks in "Happily Ever Once Upon."

Drama director Traci Thrasher and the cast of “Happily Ever Once Upon” did an amazing job creating a very entertaining, love story play.

This year’s fall play “Happily Ever Once Upon” was about the the lives of Cinderella played by Tiffany Lavalle and Prince Charming played by Omar Cruz years after they were happily married. They are suffering financially and are having communication problems since their “magical” kingdom is falling apart.

The reason for their financial problems is Cinderella’s fairy godmother played by Kiana Iwata. She blackmails Cinderella by threatening to make her look ugly again if she is not given more money to make movie productions. Prince Charming is not aware of this, which causes communication problems with Cinderella, since she is hiding secrets from him.

The production was set up nicely. Cinderella’s bedroom looked very modern and gave Disney vibes. The dresses at the ball were very nice, however a few of them were quinceanera dresses and didn’t really fit in with the whole princess category.

Although the play was entertaining for the most part, the storyline was quite rushed. For example, at one point Cinderella has a bunch of self esteem problems, but once she realizes her fairy godmother cannot make her look ugly again, her problems are suddenly solved.

Cinderella should have been comfortable within her skin, instead of fearing that Prince Charming may not like her anymore after many years of marriage.

The cast worked very hard setting up this play. The actors clearly put many hours into the play demonstrated by their confidence on stage. They had their lines memorized and they did a great acting job.

“I had the time of my life performing on stage with my close friends,” said Junior Tyler Stoner. “We worked really hard and truly dedicated ourselves to this play so the audience can have a good time.”

I rate this play a solid 8.5 out of 10. It is a very well produced play that will entertain anybody. It’s not the typical Disney love story, but is a very mature real life topic that involves problems couples face.

Everyone can still support the hardworking cast on the two remaining dates left, which are Friday Dec 8 and Saturday Dec 9 at Mark Twain Middle School beginning at 7:30 p.m. Tickets cost $5 if purchased from a crew or cast member or $7 at the door. Attendees may receive three hours of community service.