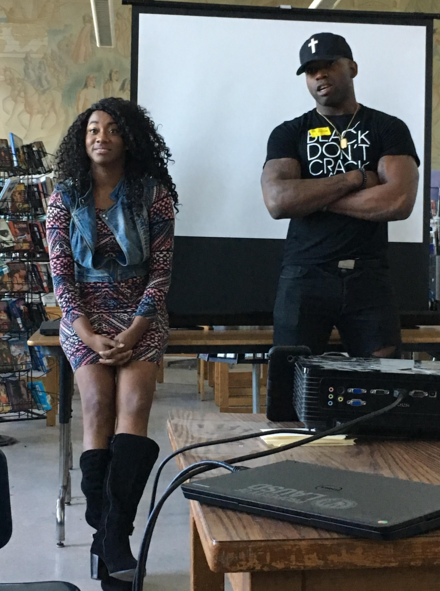 Dent is a poet, motivational speaker, and social justice advocate. In her speech, she encouraged students to advocate through art and imagination. She talked about issues such as bullying, competition, and the negative impact of unhealthy romantic relationships.

Dent gave students at Venice High School tools to utilize and maximize their youth. She talked about her past struggles with isolation and competition. She encourages students to strive for success and not hate on other people that seem to be in a higher position. She performed emotional monologues and poems, and shared the importance of both writing and poetry to express yourself.

“Motivational speaking is my passion. We all need a bit of encouragement in hard times, and to be able to make an impact in someone’s life means the world to me,” said Dent.

Former Venice High School student Aaron Davis spoke about his early struggle in life and how he turned it into a success. He mentioned that he was left by his mother in Compton California. Even though he was adopted by a nice family, he faced many struggles.

Adults and classmates told him  that he would never be able to attend college and pursue his dream in football. But he did, and proved everybody wrong by receiving a college football scholarship He encourages people to pursue their own definition of success no matter what the circumstances are. He also performed inspirational and emotional poems.

“What I love most about motivational speaking is that I have the ability to give hope to others and  better others’ lives,” said Davis. “As a child, I wish somebody would have told me what I know now. I never got any advice as a kid and I wish I did. It’s an important key to success”.

The speeches made an impact in the room, demonstrated by  students who afterwards shared their own stories about their hope of succeeding with everyone in the room. “The motivational speech really inspired me to be the best version of myself,” said Zachary Levi. “I learned many important life lessons and I hope they will be able to reflect in my future, which will hopefully be a successful one.”