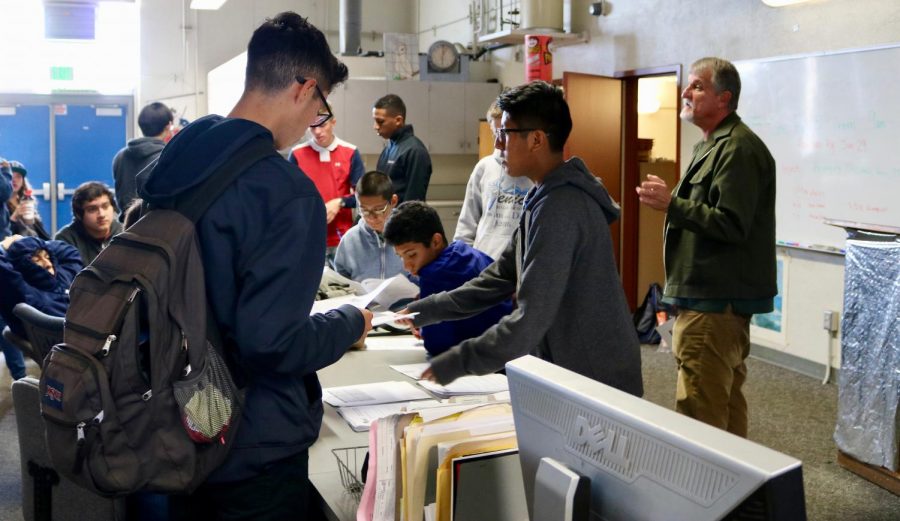 Mr.Holland telling the MESA club members to sign the paperwork for their projects.

The Mathematics, Engineering, Science, Achievement club is starting off the year with competitions coming up right around the corner.

The MESA club is a math, engineering, science achievement competition program where students from different schools battle each other and compete for a medal. The MESA club meets in Shop 2 on Tuesdays at lunch.

The sponsor for this club is teacher Mr. Donald Holland. He has been sponsoring the club for 12 years now.

Last year the MESA club won a medal in one project of the competitions at USC and three medals in math. The MESA club also won five project medals and four math medals in the preliminary rounds. This club gets their funding from grants and personally from USC.

“It is a strong program that attracts students to go here, my goal for the Mesa club is just to have more people to sign up,” said Holland. “Being in MESA makes your college applications look way better and receive scholarships easier too.” Students are required to have a c or higher to participate in competitions in MESA.

In Cansecl’s presidency, he leads all the meetings with determination and runs college meetings as well.

“This club is based on engineering and making projects,” said Cansecl. “It also creates new engineers and mathematicians/scientists for the future, not only that, it creates bonds and teamwork and my goal for the club is honestly just to have fun and more people to sign up for the club.”

“This club helps the community in a various amount of ways such as the creativity and inventors for the club will become engineers from Venice and this makes an impact on our society.” said Hamano.