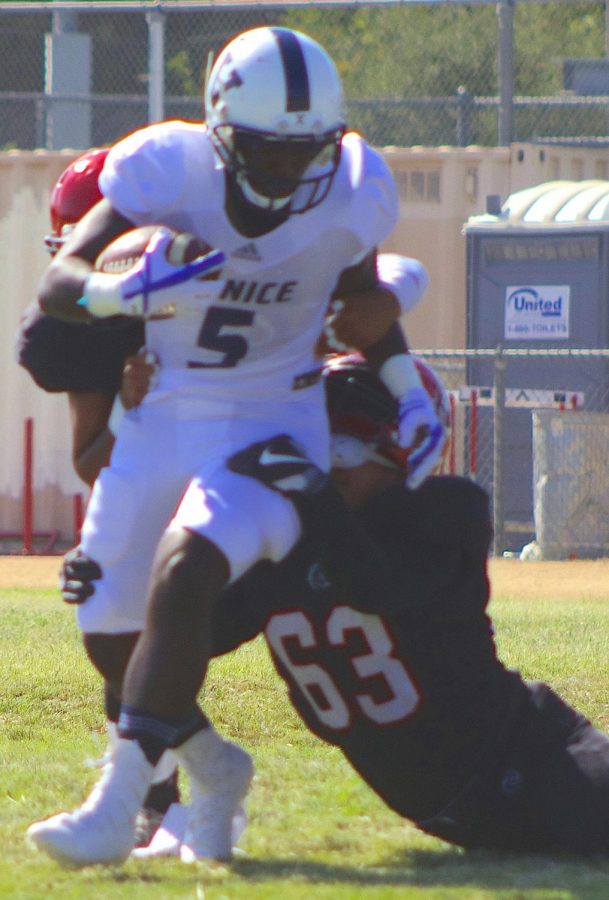 #5 Justin Cauley fighting off a member of the opposing team.

After an impressive football season, senior varsity players Justin Cauley, Brycen Tremayne, and Dion Moore were recently named to the CIF Los Angeles City Section 1st Team All City Open Division Offense. Only the most impressive players in the division are selected for the honor and that says a lot about not only the players, but Venice’s football team as a whole.

The hard work and dedication they have put into the sport over the years has been reflected on the field and is the reason they been recognized for being the best of the best.

The coaches also play a big part in their success, helping and motivating them every step of the way.

“ I never really think it’s about me,” said coach Angelo Gasca, “I think it’s their own hard work, performance and ability and how much they love to play.”

Running back Cauley finished this season with 511 rushing yards and 126 carries, averaging 51.1 yards per game, according to MaxPreps.

“ I’ve had him for several years,” said coach Ryan Shimizu. “He never complained, he just kept working hard and he’s just somebody who is really fun to work with.”

“I was happy man,” said Cauley when asked about how he felt when he found out he had been named to the 1st team All City Offense. ”It’s a blessing to be noticed for doing what you love to do.”

Cauley is committed to Montana State and will be attending on an athletic scholarship. He thanks the coaching staff for everything they’ve done for him while he has been at Venice.

“These coaches at Venice have impacted my life past football.” said Cauley,”They have a special place in my heart.”

Wide receiver Brycen Tremayne came to Venice as a transfer from Windward School where he played as quarterback for three years.

“When he came here, he played his natural position,” said Shimizu, “and was a standout player.”
Tremayne averaged 82.7 receiving yards per game and had a total of 14 touchdowns this season, according to MaxPreps. He’s received numerous offers from reputable D1 universities along with Ivy League schools like Yale, Harvard, and Dartmouth.

“I was excited,” said Tremayne,” it wasn’t all me. My teammates put me in the position to do well along with coach Gasca who I’m thankful for.”

At the beginning of the football season Venice’s quarterback, Luca Diamont, got hurt and Dione Moore was called up to fill in his position.

“He had a huge impact on the team,” said Shimizu.”He did tremendous and worked really hard.”
With 125 pass completions, averaging 182.2 passing yards per game, 8 touchdowns,and 20 touchdown passes, you could say Moore had a pretty good season.

“I was happy and excited,” said Moore,”I didn’t know I did that good and it was nice knowing I did a really good job.”

Moore also recognizes that without the coaches there motivating him throughout the season and pushing him to do the best he could he would not have had the season he had.