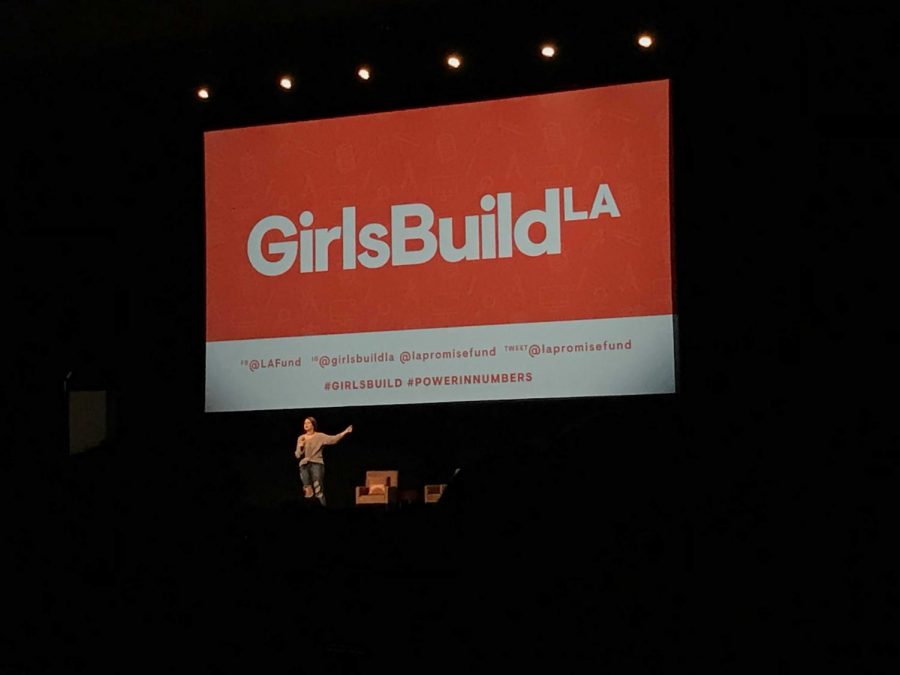 The LA Promise Fund held its first Girls Build Leadership Summit at the LA Convention Center on Dec. 15, where approximately 10,000  young women attended the event from over 200 schools. Approximately 50 girls from Venice High School attended the event in hopes of hearing the voices of powerful women like Hillary Clinton.

¨I got to hear the stories of all these women who were able to accomplish what they wanted and I learned to never give up on my dreams no matter what people tell me,¨ said junior Alejandra Valadez. ¨I thought it was pretty exciting being in a room full of women that will hopefully someday do something amazing in their lives.”

Girls Build, which is managed by the Los Angeles Promise Fund, exposes young women from middle schools and high schools to Science, Technology, Engineering and Math (STEM) content and principles. Girls Build challenges young women to engage in activities that continue to build their skills, such as critical analysis and project management. Moreover, building such skills is crucial to closing the gender gap in STEM fields, as well as the economy, according to the website of the United States Department of Commerce.

The Girls Build LA Summit welcomed Clinton, former Secretary of State, on stage. She spoke of the constant gender discrimination and difficulties she faced while in political office.

¨What I hope is that we will continue to move toward equality because it’s still the unfinished business in our country,¨ said Clinton. ¨And that’s equality not only between men and women but between races and ethnicities and all of the divides that we are still struggling with.¨

Clinton was also joined by Senator Kamala Harris, who gave the young women a heartwarming speech. Greatly accomplished professionals in the technology and entertainment industries held discussion panels throughout the event. They included the leaders of businesses like Uber and Creative Artists Agency (CAA).

Women comprised 47 percent of all U.S. jobs in 2015 but only 24 percent of STEM jobs. In addition, women constitute slightly more than half of college-educated workers but make up only 25 percent of college-educated STEM workers, according to www.esa.doc.gov, a website regarding economics and statistics in the United States Department of Commerce.

“The summit really inspired me to continue pursuing a career in the medical field and motivate my peers to do the same,” said junior Athena Koon. “To see so many successful women with backgrounds that resonated with the thousands of other girls in the same dark auditorium as me was beautiful.”

The Los Angeles Promise Fund is a nonprofit organization that partners with the Los Angeles Unified School District at two high schools and a middle school, as well as two charter schools located in South Los Angeles. Furthermore, the LA Promise Fund creates exceedingly engaging and inclusive opportunities available to students and teachers across the Los Angeles County.

“Women are the future. I really do believe that but we have to believe it about ourselves,” she said to the girls.